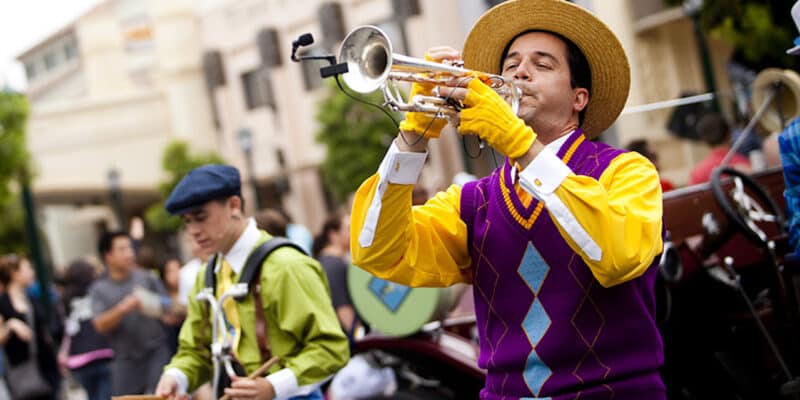 Disney has continued to bring back live entertainment at the Disney Parks and Resorts, and as fans, we couldn’t be more excited. So many streetmosphere performers have returned to The Happiest Place on Earth, bringing life and magic back to Disneyland and Disney California Adventure after a Park closure that lasted over a year. Other than character cavalcades and the character interactions throughout the Disneyland Resort, here are all of the live performers that you can see during your visit at the California Disney Parks this season.

Click here to work with a Disney travel agent and book your next Disney trip so you can see all of the Disneyland live entertainment in person!

As a reminder, if you have a Magic Key Pass, you can visit the Parks several times a year, giving you even more opportunities to catch all of the live performers. Click here to read more about the Magic Key Pass program, the reimagined Annual Passholder program.

The Disneyland Band is a staple entertainment offering of Walt Disney’s original Magic Kingdom in Anaheim, California. The Disneyland Band performs multiple times a day, and you can performances both on Main Street, U.S.A., and in Tomorrowland.

While we miss Mary Poppins and Bert dancing alongside the Pearly Band in Disneyland, we are certainly thankful that the band itself is back in The Happiest Place on Earth. You can see the Pearly Band’s live musical performances throughout the day in Fantasyland.

The Dapper Dans recently returned to Disneyland Resort after a very long hiatus, and fans have welcomed them back each and every day. You can listen to their musical croons throughout the day on Main Street, U.S.A., and in Town Square. Often, you will see and hear them singing while riding along on the horse-drawn trolley and waving to Guests passing by.

Performing their pirate tunes daily in New Orleans Square, the Bootstrappers are among our favorite live performers at Disneyland. This live musical offering adds to the immersive quality of New Orleans Square and truly makes Guests smile as they meander through this area of the Park. Be sure to check the performance calendar and don’t miss them on your next visit!

Five & Dime — a group of five guys from Chicago and an amazing singer named Dime — has become a staple act on Buena Vista Street in Disney California Adventure. During the day, this musical group performs 1920s-style jazz numbers live in the Park — and often they are joined by Goofy in his classic Buena Vista Street suit!

Though not a musical act, the Citizens of Buena Vista Street truly add to the streetmosphere of the Park. They chat with passersby and each citizen has their own unique role and personality to bring to the street. You never know what sort of conversation you’ll have with people like Officer Blue or Phi Phi the photographer!

In honor of Dia de Los Muertos this season at Disneyland Resort, Plaza de la Familia at Paradise Gardens Park in Disney California Adventure is hosting live performances throughout the day. You will be able to see the award-winning Mariachi Divas and Mariachi Espectacular. You can also see the Mariachi Divas at Pacific Wharf. You won’t want to miss these performers, who are only here for a limited time through November 2.

For more information on which performers will be at Disneyland Resort during your visit, click here to check the daily events schedule on the official website.

Which live performances do you look forward to most when you visit The Happiest Place on Earth? Let us know in the comments!