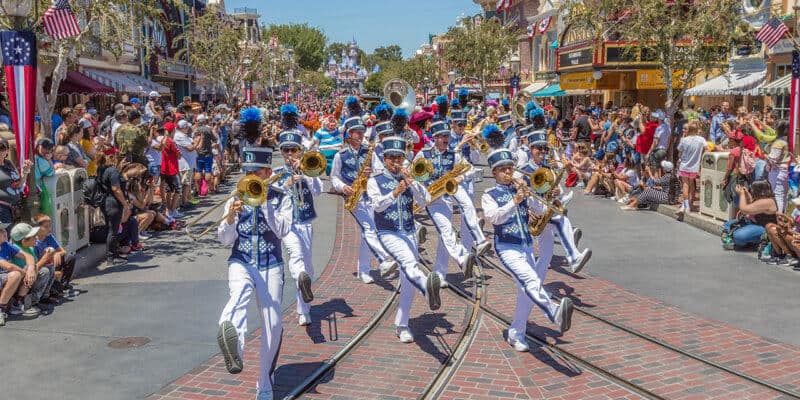 Since the reopening of Disneyland Park and Disney California Adventure Park, much has changed! Over the last several weeks since the theme parks reopened on April 30, Disneyland Resort has followed strict regulations and rules and even has encouraged visitors to get vaccinated in order to safely return to more normal operations.

Thankfully, things are looking up! Disneyland announced recently that they will allow out-of-state visitors to return to the parks beginning June 15, and more Disney Cast Members are being called back to work, giving Disney fans hope that Disneyland will soon bring back more offerings we know and love, like entertainment.

After what has seemed to be one of the longest years of our life, Disney fans can rejoice, dance, and sing as the return of our beloved Disneyland Resort Band prepares for its grand return! Disney has not yet shared when more entertainment like the Disneyland Band will be marching down Main Street, U.S.A., again, but they were recently spotted rehearsing.

Bringing the Disneyland magic back!

One of the greatest experiences Disney has to offer is live bands! Since 1955, The Disneyland Band has performed daily around Sleeping Beauty Castle, Town Square, and in front of the Golden Horseshoe, drawing crowds in with the sounds of our favorite Disney songs.

Disneyland Resort fan and local Magic & Walnut (@magicandwalnut) took to Twitter to share a short video and was excited to see the Disneyland Resort marching band practicing one of the most iconic songs from Disney’s Pirates of the Caribbean just behind Cars Land in Disney California Adventure Park:

The @DisneylandResort marching band is coming back! I spotted the band practicing in full formation tonight on an access road that runs behind Cars Land, effectively confirming the imminent return of live music to the parks. So amazing to see — and HEAR — them again! Listen in:

Although Disney has not officially announced the return of this classic entertainment group, we can clearly see that the Disneyland Band is excited to bring back the magic in the parks. We can’t wait for Disney to share more information!

What will this mean for Disneyland entertainment?

As of now, Disneyland has suspended many parades and performances around the parks, including The Dapper Dans, Mariachi Divas, the Disneyland Band, and the Magic Happens parade, but with Disneyland ramping up to increase operations as soon as they are able to do so responsibly, and the Disneyland Band rehearsing, will we see more entertainment return for the summer?

For those who haven’t experienced the world-famous Disneyland Band performing alongside Disney Characters in the Mickey and Friends Band-Tastic Cavalcade, Disney shares,

Join in on the fun of a high-energy musical procession.

The march steps off in grand style, complete with colourfully adorned Main Street, U.S.A. vehicles, and continues through the park with stops for special show moments where you can dance and clap along.

Wave to Mickey Mouse and Minnie Mouse, along with Donald Duck, Goofy and Pluto. Some beloved Disney friends who could also appear in the cavalcade include Peter Pan and Captain Hook, Genie and Aladdin, King Louie, Terk, Marie and more. You never know who you might see.

What is your favorite Disney performance or parade that you want to see return to Disneyland Resort? Let us know in the comments below!

Planning a Disneyland trip and need advice? Our friends at Academy Travel are EarMarked Diamond and are experts at helping with everything Disney! Click the link for more information!