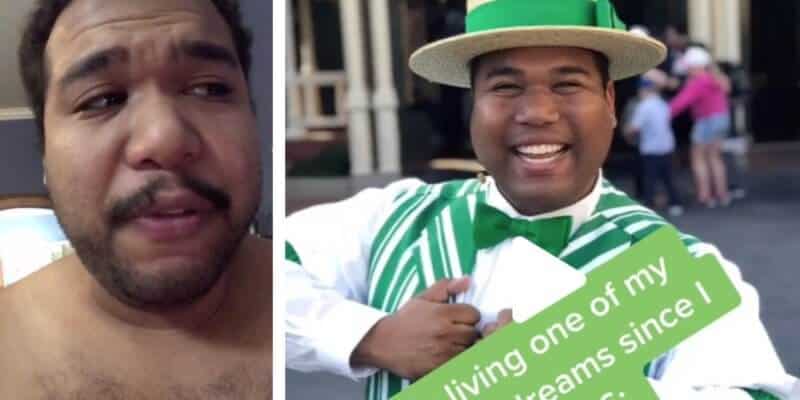 By now, most Disney fans have heard the tragic news of several different entertainment cuts that have taken place at Disney World.

We have lost spectacular performers from various shows and attractions including Festival of the Lion King at Animal Kingdom, Monsters Inc. Laugh Floor at Magic Kingdom, and more. But, it looks as though we have now lost more shining stars amidst the entertainment at Disney World — This time, the Dapper Dans.

The Most Dapper Fella on Tik Tok, terrym.pendleton, was a Dapper Dan who brought Guests joy on Main Street U.S.A. daily, and he has announced that he was let go from the Walt Disney Company.

Terry has various Tik Tok’s in which he discusses having been let go from Disney, but it was the initial announcement that really hit home for a lot of us.

So here we go. As some of you may know there have been massive entertainment lay offs at Disney World, they happened last night. And I unfortunately have been laid off… from Walt Disney World. The time I got to spend on Main St. USA is something I will always hold onto, working for the company was a dream come true for me. Working as a Dapper Dan allowed me to become a member of the Actors Equity Association, which was another dream of mine. But I don’t know what the period between now and then hold, I have no answers. But I will say this. The lay offs have includes SO many of the entertainment offerings at Disney, so just keep all of you entertainment Cast Members in your thoughts. This isn’t a good bye, it’s a ‘See ya real soon’.

As soon as this Dapper Dan posted that he was leaving Disney, fans flooded the comments of his Tik Tok praising his talents, and thanking him for the magic he created. Terry may not have been ready for the love he received, as his next Tik Tok was a heavily emotional one thanking fans for their love.

Terry also acknowledged that he was not the only Cast Member who has been let go from Disney World, and allowed Guests to know that they can do something about it by emailing wdw.guest.communications@disneyworld.com and guest.services@disneyworld.com, and letting the company know how amazing all the entertainment offerings truly are so that they know Guests want them back.

Related: How You Can Help Bring Back Disney’s Citizens of Hollywood

You can also take a survey when you visit the parks and let Disney know you are upset about the loss of entertainment at Disney World, all of these things will help to let Disney know that as soon as they are able, they need to bring these Cast Members back to the magic.

Terry dreamed about being a Dapper Dan since he was 16, and from all of us at ITM, we truly hope that that dream will return to him once more.

At this moment, we do not have any confirmation or know of any other Dapper Dan’s being let go from the company. Inside the Magic will keep you updated as we get information regarding these layoffs.

If you want to find ways you can help out laid off Cast Members, click here.

How do you feel about all the entertainment layoffs at Walt Disney World?