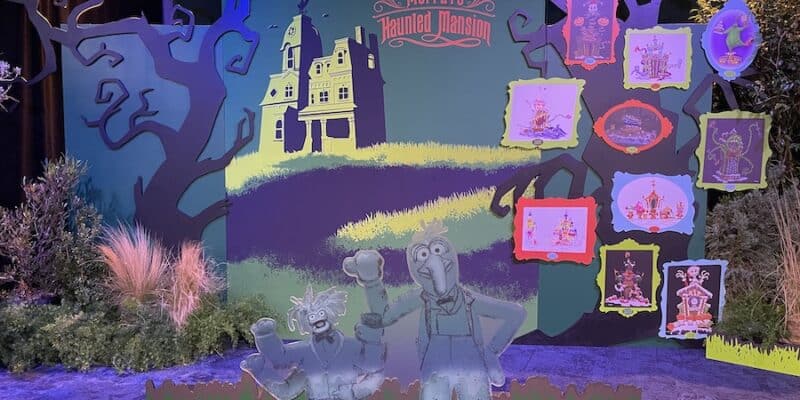 The Haunted Mansion Halloween special will feature all of your favorite Muppets and celebrities joining in to bring all of the characters to life, from Constance Hatchaway to Madame Leota. For those who want more of a description on the special, Disney has provided a ghoulish synopsis:

“Muppets Haunted Mansion” takes place on Halloween night, when Gonzo is challenged to spend one very daring night in the most grim grinning place on Earth … the Haunted Mansion. This marks the Muppets’ first-ever Halloween special and features three new original songs, “Rest In Peace,” “Life Hereafter” and “Tie The Knot Tango,” a star-studded Muppets cast, celebrity guest stars and special appearances, and frightful fun for the entire family.

Did you know you do not need to wait until October 8 to celebrate? Both Disneyland Resort and Walt Disney World Resort are hosting celebrations of their own before the special is released.

Below are all of the festivities you can find and partake in at Disneyland Resort!

Currently at the Magic Key Holder event at Disneyland park, Key Holders can find some fun photo opportunities. Starting October 1, there will be additional photo opportunities near the Esplanade. Check out the uniquely themed Honda Ridgeline that is wrapped to resemble the wallpaper designs that were created especially for “Muppets Haunted Mansion.” Honda is the official vehicle of the Disneyland Resort.

On the east coast, spooky fun is happening as well!

Available now at PizzeRizzo at Disney’s Hollywood Studios, you’ll want to try one of four different and delicious eclairs, some of which were inspired by the Muppets stretching portraits featured in “Muppets Haunted Mansion.”

Also at Disney’s Hollywood Studios, starting on October 1, you can see exclusive content from “Muppets Haunted Mansion” in the pre-show for Muppet*Vision 3D.

Over at Magic Kingdom Park, beginning October 8, look out for a special Magic Shot that the Disney PhotoPass photographer in front of the Haunted Mansion can add to your photo. You might spot a familiar face floating around your photo as Madame Pigota!

Considering Halloween is in full swing at the Disney Parks, these new additions will be a great way for daytime Guests to indulge in the haunts! Because Boo Bash and Oogie Boogie Bash are both extra ticketed events, this will be an excellent way for Guests to get something extra at the theme parks before the events begin.

If you want to check out the trailer for the Halloween special, take a look below!

As we have reported, John Stamos will also make a special appearance in the fun Halloween movie along with Imagineer Kim Irvine — the daughter of the original Madame Leota — and Darren Criss, who will play the Haunted Mansion’s groundskeeper who will team up to create “The Boo Crew.” On top of the Yvette Nicole Brown has been cast to play the hearse driver. There will also be a special appearance by the late Ed Asner.

Are you looking forward to the Muppets Haunted Mansion special?