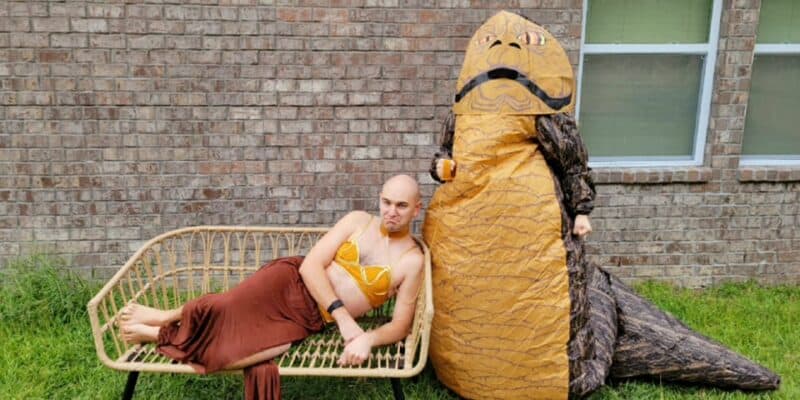 Life is ‘gourd’. We’ve got our candy corn ready, our spooky decorations on the porch, and lights illuminating the house – so now it’s just the Halloween costumes that need to be readied for the big night.

Disney Parks are decked out in their ghoulish decor, with Disneyland Paris hosting its annual Halloween festivities, Oogie Boogie Bash – A Disney Halloween Party returning to Disneyland Resort in California after the pandemic, and Disney’s After Hours Boo Bash in Walt Disney World Resort providing frights and fun.

We’ve seen some incredibly creative costumes come from these spooky events, as well as parties at home, so here’s a look at the best Disney-inspired costumes this year to help lift your ‘spirits’ and get some inspiration for your Trick or Treating adventures!

Brave enough to don a gold bikini was this husband, with a couple’s costume from a galaxy far far away –  as Jabba the Hut and Princess Leia from Star Wars: Return of the Jedi (1983):

Family Disney costumes every year. Robin Hood this year since our 3 yo is obsessed with foxes. We love this family tradition

Tara M. shared a fun photo of her family dressed as characters from The Muppets, including Kermit the Frog, Miss Piggy, and even the Swedish Chef:

Tabitha B. used her pregnant belly in a very creative way, becoming the Genie from Disney’s Aladdin (1992) alongside her wonderful family:

We had an amazing time at our neighborhood Halloween parade as the cast of Aladdin! The kiddos absolutely loved waving to everyone and wishing them a Happy Halloween!

While Brittney D. stuck with the Disney classics and went with a very adorable Winnie the Pooh theme this Halloween:

There was some ghoulish delight in Erin Kathleen V.’s costume, with 9-year-old Lexi transforming into Madame Leota from Disney’s Haunted Mansion attraction:

Happy Halloween from Madame Leota and the maid

Sabrina M. celebrated the world of Pixar’s Inside Out, with a spot-on Sadness costume:

Agonythis posted a photo on Twitter of a fantastic Maleficent costume, based on the live-action remake released in 2014:

#maleficent #halloween #costume #disney she loved this one so much pic.twitter.com/YRLLCp9oNa

Nebraska Medicine posted the most adorable Disney-inspired costumes, with tiny outfits made for babies in the NICU:

All the Friday feels right here!
Thanks to our March of Dimes family support team and our NICU nurses for making Halloween special for our tiniest patients. Want to see more of these adorable Disney-inspired costumes? Check out https://t.co/MkN2ADbU5B pic.twitter.com/XVS5U5qeeI

From Marvel Studios to Disney animated classics, we hope this roundup of creative costumes has inspired your own Disney-themed Halloween – or even your own husband to wear a gold bikini.

What is your costume for Halloween this year? Let us know in the comments!

Comments Off on The 10 BEST Disney Costumes Seen This Halloween!