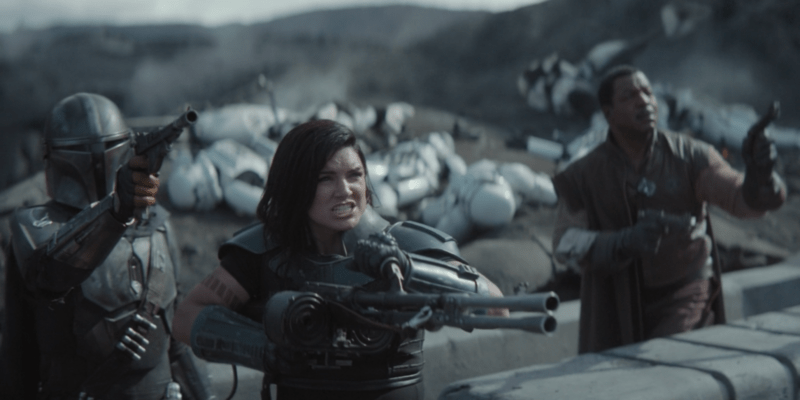 The Mandalorian is set to return to our screens sometime in the near future, although an exact date is yet to be confirmed. While we know that Pedro Pascal’s titular bounty hunter, Din Djarin, will come back to the hit Disney+ series, little else is known about the direction of the third series.

One thing is for sure, Gina Carano’s Cara Dune will not be back as the marshal of the New Republic due to controversy earlier this year leading to her being fired from Lucasfilm. Upon her dismissal, Star Wars fans were quick to call for Carano’s replacement and the actress in question has finally addressed the outcry.

Carano’s Cara Dune first appeared in The Mandalorian‘s Season 1 episode, “Chapter 4: The Sanctuary” directed by Bryce Dallas Howard. Showrunner Jon Favreau had Carano’s character appear throughout the first and second seasons of The Mandalorian, and was last seen in the Season 2 finale in the battle with Moff Gideon (Giancarlo Esposito) and the Dark Trooper squad.

Following the end of the second season, Carano was fired from Lucasfilm following a series of controversial social media posts. Throughout this conflict in Star Wars history, topics like #FireGinaCarano, #WeLoveCaraDune, and #CancelDisneyPlus trended online as Star Wars fans debated whether Carano’s posts and political opinions should warrant her firing from The Mandalorian. Carano herself said she found out about her termination from Star Wars via social media.

With Season 3 looming, Carano has since found her own project with The Daily Wire‘s Ben Shapiro. Currently untitled, the action-thriller will be Carano’s first role since leaving Lucasfilm. However, the actress blew up social media earlier this year after her delayed appearance on Running Wild with Bear Grylls caused #GinaGoneWild to trend online.

While Cara Dune won’t be recast, Lucy Lawless — star of Xena: Warrior Princess (1995-2001) — was the first choice of many fans after Carano’s firing became public. The actress became the face of the potential Cara Dune recasting in February, and now, the My Life is Murder star has spoken out about how this outcry caused potential conflict for her and Star Wars.

Speaking to Metro, Lawless revealed that she was already in discussions with Lucasfilm about appearing in a different project.

‘Well to be honest with you, I was already in discussions about something on – it wasn’t The Mandalorian – something Star Wars-affiliated,’ Lawless said.

The actress goes on to address how it could have affected her future with the galaxy far, far away:

‘It might have hurt me in some way, because then they couldn’t hire me because it would seem to be pandering to… I’m just guessing here, I don’t know anything, but in some ways, it can be unhelpful, because if they pander to this fan group, then how are you going to pander to every other fan group, do you know what I mean?

Lawless isn’t a complete stranger to the Star Wars universe though. In 2020, she starred as the Aeosian Queen character in Dave Filoni’s Star Wars: Resistance. Lawless then touched on the circumstances leading up to her being suggested as a new Cara Dune:

‘I became political and I had nothing to do with the discussion,’ she said.

However, the Xena star did acknowledge the support from Star Wars fans:

‘But that’s the way the world is and they meant it out of love, and I thank the fans for their fealty to me,’ she said.

‘I haven’t thought about that since, so it hasn’t given me any pain, but that was my thought at the time, like, ooh, this makes me look like a political appointment, and not an actress.’

The Star Wars studio has been clear that the role of Cara Dune won’t be recast — an action that has also seemed to cause one of The Mandalorian‘s follow-up TV shows, Rangers of the New Republic, to “no longer be in active development”. Rangers of the New Republic was set to take place in The Mandalorian timeline alongside Ahsoka Tano’s (Rosario Dawson) titular series, Ahsoka, and The Book of Boba Fett. The latter will be the next in Star Wars‘ streaming outings, coming this December following The Bad Batch and Star Wars: Visions which also debuted this year.

The Mandalorian Season 3 is said to be finally in production, thanks to Greef Karga actor, Carl Weathers. The third season will likely also see the return of Bo-Katan Kryze (Katee Sackhoff) — Sackhoff recently commented on her character’s “unfinished business” with Din Djarin and the Darksaber. After the shocking Season 2 finale with Jedi Luke Skywalker (Mark Hamill) and Grogu AKA “Baby Yoda”, the direction of The Mandalorian Season 3 is truly wide open.

What do you think of Lucy Lawless’ comments? Let us know down below!