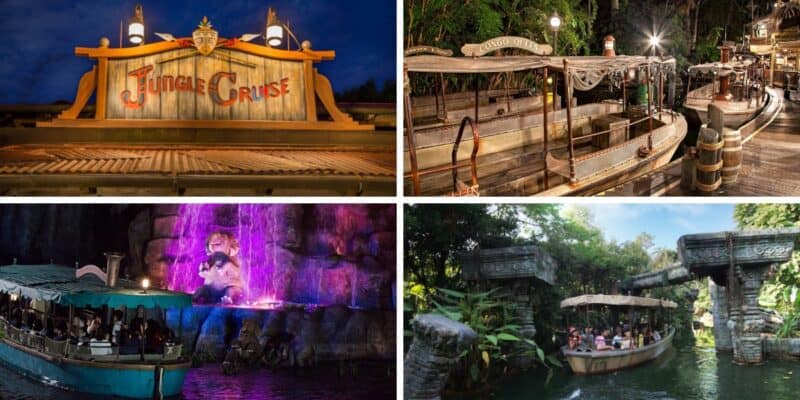 Being inside a Disney theme park can truly transport you to a world of magic and endless possibilities. Whether you are flying on one of Aladdin’s magic carpets, or traveling to the planet of Batuu and battling Kylo Ren, there are just so many places to go. However, maybe you don’t want to fly on a carpet or travel to another planet. Maybe you want to go on a river journey that takes you to a variety of amazing places.

If so, Disney has you covered there too! Disney’s world-famous Jungle Cruise will take Guests from the Amazon to the Nile and more. Here is everything you need to know about Disney’s Jungle Cruise attraction!

What is the Jungle Cruise?

Disney’s Jungle Cruise ride takes Guests on a “10,000-mile” river journey, complete with angry hippos, elephants, and the eighth wonder of the world — the backside of water! Skippers who are full of punny quips and dad jokes will guide you along your tour of some of the world’s most beautiful locations.

Here is more information on the fun attraction from the Walt Disney World website:

Along the Nile, watch for bathing elephants, angry hippos and hungry lions. Your cruise continues down the Mekong River in Asia, home to baboons, cobras and other fearsomely life-like creatures.

Different Versions of the Jungle Cruise

While Walt Disney World, Disneyland Resort, Tokyo Disneyland, and Hong Kong Disneyland all have the Jungle Cruise ride, they are not all the same. Disney loves to make each experience its very own, and that is no different when it comes to its famous attractions. However, each attraction does last about 10 minutes.

Below is each different Jungle Cruise ride experience you can have at Disneyland, Tokyo Disneyland, and Hong Kong Disneyland (the Magic Kingdom description is written above).

Cast off on a thrilling expedition where elephants, gorillas, hippos and maybe even a headhunter await your arrival.

Trek to a dusty tropical jungle outpost—laden with hanging cargo nets, wooden crates, timber canoes and rusty anchors—and board a weathered tramp steamer for an exciting adventure along a remote tropical river. Led by your trusty skipper, leave civilization behind as you navigate through treacherous waters rarely seen by man.

A True-Life Adventure
Encounter awesome wonders and startling surprises along the river route. Highlights of your unforgettable 8-minute journey include:

Throughout your amazing voyage, take in lively narration from your friendly skipper, known for a brave heart and a clever joke… or two.

Native Languages
Upon entering the covered boathouse dock at the front of the attraction, choose one of 3 queues indicating the language spoken by your skipper—Cantonese, Putonghua or English. Please note, all lines advance at approximately the same rate.

Board a boat with a brave, light-hearted skipper who loves the jungle. You’ll see elephants, crocodiles, lions and other wildlife on this adventure tour where surprises and mysteries await you. There’s also a nighttime cruise that takes you through the jungles wrapped in an even more mystic and thrilling atmosphere.

Where Can You Find Disney’s Jungle Cruise Attraction?

At the Walt Disney World Resort, the Jungle Cruise attraction is found in the Adventureland area of the theme park. Adventureland is on the left side of the Magic Kingdom theme park and is the first land on the left that Guests will encounter as they walk down Main Street U.S.A.

Guests walking into Adventureland will find Jungle Cruise next to Pirates of the Caribbean and across from The Magic Carpets of Aladdin and Walt Disney‘s Enchanted Tiki Room.

Also located in Adventureland, Tokyo Disney’s Jungle Cruise Wildlife Expeditions attraction can be found next to Thunder Mountain Railroad, which is technically located in Westernland. Unlike other Disney theme parks, Adventureland is very small and is mainly taken up by the Jungle Cruise.

Jungle Cruise boats are handicapped accessible and Guests who are traveling in wheelchairs or electric scooters may remain in their wheelchair and scooter as they enjoy the attraction.

Guests with hearing impairments can also receive assistive listening devices or even a sign language interpreter upon request.

The Jungle Cruise at Disneyland has been around since the theme park opened in July of 1955. At Walt Disney World, the Magic Kingdom opened in 1971 and received the Jungle Cruise attraction in 1983. Things have changed a lot in the 50 and almost 40 years, respectively, including people’s attitudes and sensitivities towards other cultures.

Both Disneyland and Disney World Jungle Cruises had the character of Trader Sam, as well as a native welcoming tribe. Over the years, many have deemed the scenes and Trader Sam to be culturally insensitive. Disney has reimagined both attractions and is, as Disney says:

“building on the story of the Jungle Cruise at both Disneyland park at Disneyland Resort and Magic Kingdom Park at Walt Disney World Resort to include new adventures that stay true to the experience we know and love – more humor, wildlife and skipper heart – and also reflect and value the diversity of the world around us.”

It Recently Became a Blockbuster Movie

The Jungle Cruise has been a must-ride attraction since it opened at all four Disney theme parks. It is so popular that on July 24, 2021, Jungle Cruise starring Dwayne Johnson and Emily Blunt sailed into theaters. Fans of the Pirates of the Caribbean franchise will love all of the action and adventure of the Jungle Cruise movie, while fans of the ride will love the puns that absolutely could not be left out.

Each version of the Jungle Cruise attraction has its own spin, and Hong Kong is no different. Guests riding Hong Kong’s Jungle Cruise will find themselves right in the center of a battle between a fire God and a water God and water and fire will shoot up around them. Who will win? You’ll need to ride to find out!

While building Disneyland in Anaheim, California, Walt Disney wanted to keep things as authentic as possible. For the Jungle Cruise, this meant bringing in real live animals. Eventually, Walt and his Imagineers discovered that such a plan was just not feasible, so they improvised and built the animals that you can see along the Jungle Cruise today.

Some Versions Receive a Christmas-themed Overlay

It Has a Great Connection to Tarzan

Disney loves to connect films and attractions through Easter eggs, although they are sometimes more obvious than that. Guests riding the Jungle Cruise will be able to see the incredible Schweitzer Falls — which is named after Dr. Albert Falls. In reality, Dr. Albert Schweitzer was a real humanitarian who traveled deep into the jungles of Africa to help the indigenous peoples there.

Some Pretty Famous People Have Been Skippers

Disney has been known to employ some famous actors and actresses before they become the stars we know today. Steve Martin, Michelle Pfeiffer, and Wayne Brady all call themselves former Cast Members. There are also some A-List celebs who call themselves a former Jungle Cruise skipper — including Robin Williams and Kevin Costner.

There is so much to see once you board the attraction, each Guest may have their own favorite aspect. Maybe you love seeing all of the elephants — don’t worry, they all have their trunks on. Perhaps you like the skippers pointing out all of the wildlife, and maybe giving them a name or two. Whatever you love about the Jungle Cruise, there is always something to love about the world-famous Jungle Cruise!

What do you love about the Jungle Cruise? Which Disney Park has your favorite version? Let us know in the comments!

CLICK HERE to book your adventure-filled Disney vacation with our friends at Academy Travel – an EarMarked Diamond travel agency that can provide you with a free quote today!