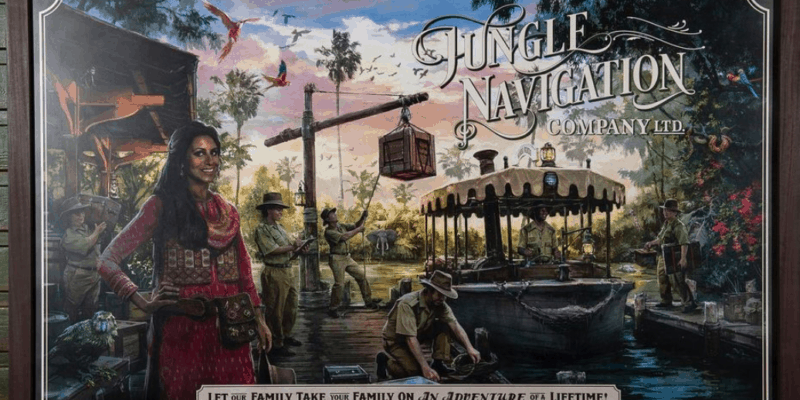 Disney Imagineers have been working continuously on the revamp of Jungle Cruise at both Walt Disney World and Disneyland.

In case you were not aware, elements of the popular theme park ride are being reimagined for Guests so they can enjoy a brand-new Jungle Cruise experience called Rivers Journey. This revamp is currently taking place at both Disneyland Park at Disneyland Resort in California and Magic Kingdom at Walt Disney World Resort in Florida.

The new version of the attraction is part of Disney’s efforts to tell diverse, inclusive stories across the theme parks. With this being said, we are also being introduced to new characters, including Alberta Falls!

The attraction’s new backstory is centered around Alberta Falls, granddaughter of world-renowned Dr. Albert Falls, as the proprietor of the Jungle Navigation Company Ltd. And as we near the completion of the revamp at Magic Kingdom in Walt Disney World, Disney Imagineers have just installed a new mural highlighting Alberta Falls!

Walt Disney Imagineering posted a photo of the new mural along with the caption:

We’re excited to share a first look at this recently installed mural of Alberta Falls and her family of Skippers at the Jungle Cruise inside Magic Kingdom Park. Disney Imagineers created new characters, new scenes and an expanded storyline as part of the attraction enhancements, establishing Alberta, granddaughter of the world-renowned Dr. Albert Falls, as the proprietor of the Jungle Navigation Company Ltd. The addition of this mural marks the completion of the Jungle Cruise enhancements @WaltDisneyWorld!

As we mentioned earlier, the new version of Jungle Cruise is part of Disney’s efforts to tell diverse, inclusive stories across the theme parks. Earlier this year, Disney Parks Blog shared that the company is “building on the story of the Jungle Cruise at both Disneyland park at Disneyland Resort and Magic Kingdom park at Walt Disney World Resort to include new adventures that stay true to the experience we know and love — more humor, wildlife and skipper heart — and also reflect and value the diversity of the world around us.”

Are you excited to see Jungle Cruise being revamped? Have you been on the attraction recently? Let us know in the comments below.