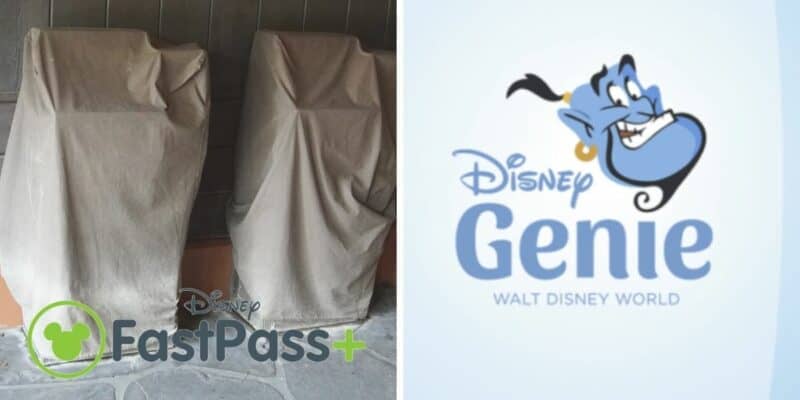 Coming this fall to Walt Disney World Resort and Disneyland Resort, Disney Genie is a complimentary and convenient new digital service designed to create your best Disney day! Disney Genie will be built right into the My Disney Experience and Disneyland apps, making the service easy to access.

In case you are not yet aware, Lightning Lane selections can be made on the same day of your visit to the theme parks and can be used across multiple theme parks. Attractions will continue to offer a traditional standby queue, or a virtual queue at certain attractions (such as Star Wars: Rise of the Resistance).

Now, as we know that FastPass+ will not return to Walt Disney World, we are seeing a handful of FastPass kiosks remain covered up.

Related: Disney Fans Are Furious With New Paid Rise of the Resistance Opportunity

Bioreconstruct shared photos of the FastPass kiosks in the walkway between Frontierland and Adventureland at Magic Kingdom, which are still covered up as FastPass is officially retired. Per Bioreconstruct:

Fastpass+ machines in the primary covered walkway between Frontierland and Adventureland.

Fastpass+ machines in the primary covered walkway between Frontierland and Adventureland. pic.twitter.com/0FZsnaogMO

This isn’t much of a surprise as, again, FastPass+ will be retired as a new paid system will debut along with the Disney Genie — meaning the kiosks will more than likely remain covered up and even possibly removed in the near future.

The Disney Genie+ Lightning Lane queue system will be rolled out sometime this fall, though an official debut date wasn’t released.

Are you excited for when the Disney Genie app debuts? Or are you upset to see FastPass coming to an end? Let us know in the comments below.