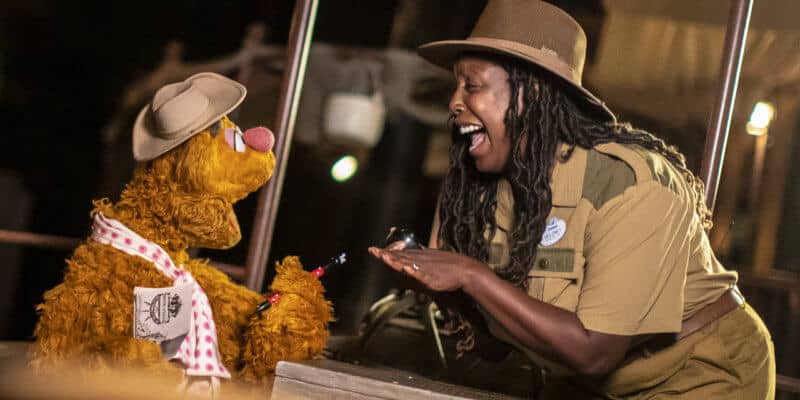 When Guests go on Jungle Cruise at either Disney World’s Magic Kingdom or Disneyland, there is one thing that is always certain, and that is that your cruise will be filled with corny jokes that you cannot help but smile at.

Lately, the Jungle Cruise attraction at both theme parks have undergone a large change, as the attraction plot line and multiple shows scenes have been reimagined to remove culturally insensitive aspects of the attraction. At the moment, Disneyland’s rendition of the attraction is once again open; however, Disney World’s version is still undergoing a few changes. Lucky for Guests, the refurbishment is being done while the ride is still operational.

Now, it looks like Disney is looking for a much more furry character to helm their ships. We have seen a lot of Muppet cross-promotion lately, and now, we see the IP bleed into theme park attractions. Disney Parks blog posted a YouTube video of Fozzie Bear getting a comedy lesson from one of the Jungle Cruise Skippers at Disneyland, and it sounds like Fozzie had a lot to learn.

If you want to check out the full video full of cheesy jokes, you can below!

Fozzie Bear is no stranger to funny business. As the Muppets’ resident slap-stick quipster, Fozzie is always eager to learn new ways to take his comedy routine to the next level.

And what better way to learn than from one of Disneyland Resort’s most comical cast members, the Jungle Cruise skipper?! Check out Fozzie’s recent pun-filled encounter with the skipper before they set sail on the tropical rivers of the world.

You know him from @TheMuppets as the un-bear-ably funny jokester. Watch what happens when Fozzie Bear meets his comedic match in the form of one of @Disneyland’s most comical cast members: the Jungle Cruise skipper! https://bit.ly/2Xk6wct

You know him from @TheMuppets as the un-bear-ably funny jokester. Watch what happens when Fozzie Bear meets his comedic match in the form of one of @Disneyland’s most comical cast members: the Jungle Cruise skipper! https://t.co/RXnB7IUyig pic.twitter.com/VCRoBd94nI

It seems that Disney is pushing people to head to Disney+ and check out The Muppet Show to continue to enjoy laughter from their favorite Muppets!

What do you think of this Muppet crossover? Let us know in the comments below!