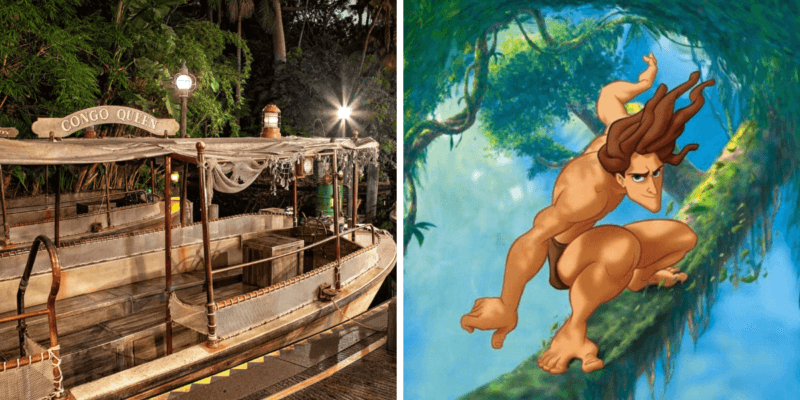 Guests riding The World Famous Jungle Cruise at both Walt Disney World and Disneyland are treated to what is called the “Eighth Wonder of the World”. What is it, you may ask? Why it’s the backside of water! The backside of water from the gorgeous Schweitzer Falls, named for Doctor Albert Falls.

Is Dr. Albert Falls a real person? The answer to that is no. However, Dr. Albert Schweitzer is in fact a real German doctor. This German Doctor has had more influence on Disney than maybe you know.

First, let’s take a look at The Jungle Cruise.

When Walt Disney first came up with the idea for the Jungle Cruise, he wanted to give Guests a real-life river journey throughout the world that included real-life animals from those locations. However, that idea quickly became too expensive and unrealistic. Imagineers had to scrap the idea and come up with a brand new Jungle Cruise attraction.

According to Disney Wiki Fandom:

When plans began to develop, Bill Evans, the Imagineer responsible for landscaping Disneyland and most of Walt Disney World, faced the daunting task of foresting an entire jungle on a limited budget. Aside from importing many actual tropical plants, he made wide use of “character plants” which, while not necessarily exotic, could give the appearance of exoticism in context. In a particularly well-known trick, he uprooted local orange trees and “replanted” them upside-down, growing vines on the exposed roots. The clean water was dyed brown to prevent visitors from seeing the bottom of the “river”, which varies between three and eight feet deep.

While the idea of having real animals and real plant life from around the world was not something that was feasible, Walt still wanted to give Guests an education on animals and wildlife that could be found around the world. The original Jungle Cruise was meant to be a more serious experience for Guests and not the pun-filled, but still amazingly funny, attraction that we know and love today.

Schweitzer Falls’ practical purpose is to be a sort of mixer for the brown-dye and water in the Jungle Cruise’s artificial rivers as a means of hiding the mechanisms underneath of the water. In real life, the faux-waterfall was named after Dr. Albert Schweitzer, an early 20th century humanitarian who was renowned for his work in Africa. Dr. Schweitzer was originally stated by skippers to be who discovered the falls while Dr. Albert Falls being the namesake was originally an improv joke. This joke made its way into the ride’s official script in the 1990s and Albert Falls was made into an actual character with the opening of the Skipper Canteen.

So, while Albert Falls and his backside of water wonder may only be a joke, Dr. Albert Schweitzer is not. Dr. Schweitzer is a renowned German doctor who journeyed into the jungles of Africa to help the people who lived there.

According to Disney History 101:

When he [Schweitzer] and his wife arrived at Lambaréné, their first clinical facility was located inside a former chicken shed (which they promptly disinfected). News of the new doctor spread quickly, and they treated rampant cases of leprosy, dysentery, malaria, and syphilis, in addition to general injuries, fevers, tumors, hernias, and sores. With access to European medicine, Schweitzer’s hospital became a source of hope for all in the region.

Dr. Schweitzer spent the rest of his life working with the African people and by the time he died, he had created a hospital complex that was 72 buildings and 600 beds large. The hospital is still in use today.

Here is a picture of Dr. Albert Schweitzer:

Look familiar? Disney movie buffs may immediately recognize this man, who helped inspire the Jungle Cruise, from another one of Disney’s jungles; the jungles from the 1999 animated film Tarzan.

One of the characters in the animated film is the father of Tarzan’s love interest Jane, Dr. Archimedes Q. Porter. Dr. Porter is pictured below.

The fact that these two men look so similar is not an accident.

Harald Siepermann was one of the animators on Tarzan. His job was originally to help visually create the family of gorillas. After he finished with that aspect of the project, he took on other characters in the film. One of those characters was Archimedes Q. Porter.

While Siepermann originally wanted Porter to look more apelike, due to his interest in primates in the film.

Even though his drawings were well-received, it was soon decided to keep Dr. Porter more human-like. Seipermann had to go back to the drawing board.

A big breakthrough with the character came when Harald Siepermann thought of Albert Schweitzer, a German philosopher, humanitarian, and musician. “I didn’t know where to go visually with this character, because I didn’t want to use other cartoon-professor as reference,” commented Siepermann. “I wanted to get away from that cliché and was looking for some other kind of inspiration. Then it hit me. Some sketches I had done reminded me of Albert Schweitzer, a philosopher, doctor, musician and humanist, who founded a hospital in the jungle at the beginning of the last century. Always very much a gentleman, always in a white shirt and a bowtie.”

In Tarzan, Dr. Archimedes Porter is an adventure-loving explorer who journeys to Africa in search of African gorillas. In real life, Dr. Albert Schweitzer also traveled to Africa to help the people that lived there. Seems to be that inspiration for Dr. Porter was found in the right place.

While there is no connection to Dr. Porter or Tarzan on The World Famous Jungle Cruise, it is always fun to find these connections between rides and films.

Do you love the Jungle Cruise / Tarzan connection? Let us know in the comments!

Comments Off on The Incredible Connection Between The Jungle Cruise and Tarzan!