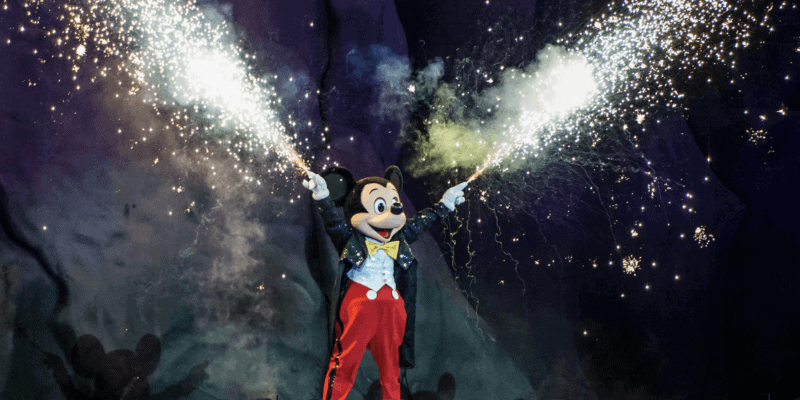 If you are planning to check out Fantasmic! at Disney’s Hollywood Studios on your next Walt Disney World Resort vacation, be sure to take these tips and tricks!

Please keep in mind that at this time, Fantasmic! remains temporarily unavailable at Walt Disney World due to the ongoing pandemic.

About Fantasmic! at Disney World

When to watch Fantasmic!

Fantasmic! typically shows on select nights at Disney’s Hollywood Studios; however, since this is an outdoor show, it is also subject to cancellation due to inclement weather. Showtimes are subject to change.

Where can you find a daily schedule of Fantasmic! showings?

Fantasmic! is performed on select nights only. Be sure to check Disney’s entertainment schedule, the My Disney Experience app, or the Times Guide at Disney’s Hollywood Studios for the most up-to-date showtimes.

Characters in the Fantasmic! show

Since Fantasmic! brings Guests into Mickey’s dreams, we, of course, will see Mickey Mouse as both himself and as Sorcerer Mickey. But that’s not all because Guests will also see characters from fan-favorite movies including Beauty and the Beast, Sleeping Beauty, The Little Mermaid, Aladdin, The Lion King, Pocahontas, and Snow White and the Seven Dwarfs.

Some of the characters you will see in the show include Cinderella, Prince Charming, Ariel, Prince Eric, Belle, Beast, Aladdin, Jasmine, Snow White, The Prince, Aurora, Prince Phillip, Tiana, Stitch, and more.

Because Mickey’s dreams soon become a nightmare, Guests should also expect to see some of Disney’s most iconic villains, including the one and only Maleficent! Other Disney Villains that make appearances include Ursula, Cruella De Vil, Scar, Claude Frollo, Jafar, Hades, and others.

What characters are unique to the Fantasmic! show?

One of the most unique characters featured in Fantasmic! is Maleficent as she is in the form of a towering, 40-foot-tall dragon!

Other rare characters that you may spot that do not typically appear in other areas of the theme park include Pinocchio, Geppetto, Doc, Grumpy, Happy, Sleepy, Sneezy, Bashful, Dopey, Genie, Moana, Beast, Rafiki, Br’er Bear, John Smith, Meeko, Baloo, Mary Poppins, and Bert.

What characters are the primary ones in the Fantasmic! show?

The primary character in Fantasmic! is, of course, Mickey Mouse, but some of the other major characters include Pocahontas, John Smith, Simba, Nala, and Rafiki, as well as the iconic neon monkeys that make an appearance during the Lion King portion of the show.

Which characters are the villains in the Fantasmic! show?

The most iconic villain seen in Fantasmic! is Maleficent as she is in the form of a towering, 40-foot-tall dragon! Other Disney Villains include Monstro, Governor Ratcliffe, The Evil Queen, Magic Mirror, Ursula, Cruella De Vil, Scar, Claude, Frollo, Jafar, Hades, and Chernabog.

How to prepare for a Fantasmic! performance

If you want to witness the incredible nighttime spectacular, Fantasmic!, we highly recommend planning in advance. Guests tend to line up outside of the Theater of the Stars near Tower of Terror and Rock ‘n’ Roller Coaster located on Sunset Boulevard very early to ensure they are able to get into the amphitheater and grab a spot. Once the theater is filled, Guests will not be allowed in, so to ensure you get a spot for the showing, we highly recommend lining up early.

What stories do you need to know in order to be prepared for a Fantasmic! performance?

If you know the classic Disney animated stories, including Sleeping Beauty, The Lion King, and Fantasia, you will have a better understanding of the characters and their backgrounds; however, if you do not know these stories, that is okay! You will still enjoy the performance as the Disney characters, lighting, special effects, and more tell a story in itself.

Where to sit for the best view of Fantasmic!

Because Fantasmic! is hosted inside an amphitheater, there really isn’t a bad seat in the house! Though, if you end up sitting on one of the far ends, seeing the water screens or the center stage may be a bit more difficult than if you were in the middle of the theater.

Where are the best seats for Fantasmic! if you have small children?

As we mentioned before, there really isn’t a “bad” seat for Fantasmic!, but if you want to really get the full experience, we recommend trying to sit somewhere in the middle of the theater so you are able to see the water screens, characters, and center stage.

Where can you sit for Fantasmic! to get the least obstructed view?

How can you get the best seats for a Fantasmic! performance?

Most of the time, Guests pick their own seats — especially if you are there early. But Cast Members do try and direct traffic to an extent to ensure that all of the seats are filled. If you are looking for a specific spot, make sure to ask a nearby Cast Member to see if they are able to make some magic for you and your party and get you to a spot that you want.

Related: Romance and Planning to Propose at Disneyland Resort

Is Fantasmic! a must-see for you and your family? Let us know in the comments below.

Comments Off on Best Fantasmic! Viewing Spots, Tips, and Tricks