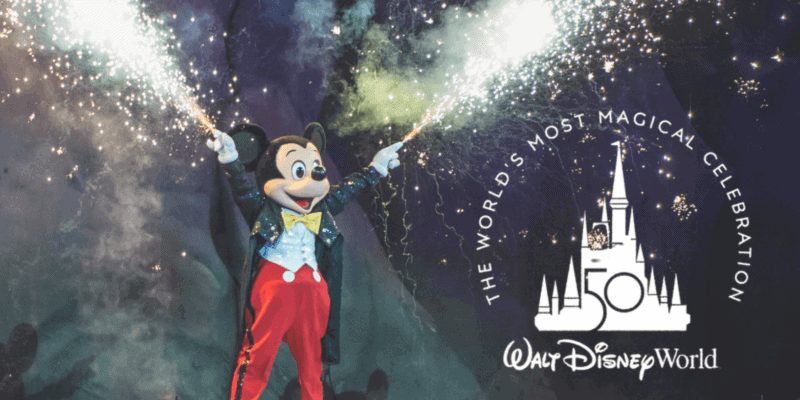 It’s safe to say that many Guests are missing nighttime spectaculars at Walt Disney World, including Happily Ever After at Magic Kingdom and Fantasmic! at Disney’s Hollywood Studios. Due to the ongoing pandemic, Disney World had to make the decision to pause entertainment offerings to keep both Guests and Cast Members safe during this unprecedented time.

However, as more people become vaccinated, as COVID-19 cases continue to go down, and as Disney CEO recently shared hope for the future, could we see the fan-favorite show, Fantasmic!, return in time for Walt Disney World’s 50th anniversary? Here’s what we think!

Although this is not any confirmation that Disney is reopening Fantasmic! soon, Disney did recently file a handful of permits for the Fantasmic! location in the theme park. The permits do not give much detail, but these could have been filed in order to help Disney World prepare for the reopening of the nighttime show or could just be for general maintenance considering the lagoon has been dry since last year.

Some possibilities surrounding these permits could be that the theme park could be looking to add safety protocols into the amphitheater including social distancing measures, plexiglass, as well as other safety measures that have already been implemented in other areas of the Walt Disney World Resort.

However, this is pure speculation and Disney has not announced if they are working on adding safety protocols into the theater or when the show will reopen.

Since last year, the Fantasmic! lagoon at Disney’s Hollywood Studios has been drained as the theme park cannot currently host the nighttime show due to the pandemic. And this is still true as just recently Twitter user Bioreconstruct shared an aerial view of Hollywood Studios showing the lagoon, which still does not have any water in it.

But even though the lagoon remains dry at this time, doesn’t mean Disney isn’t thinking about reopening the show to Guests in the near future.

During the recent Walt Disney Company’s Shareholders meeting, Disney CEO Bob Chapek was asked if he had an update on the entertainment offerings at Walt Disney World.

Additionally, Disney Parks released a statement, not long after the entertainment industry was hit with layoffs, expressing that they do plan to bring back entertainment when the time is right.

With all of this being said, it does seem that entertainment and nighttime shows are top of mind for the company — it just seems to be a matter of when Disney can safely bring these offerings back to Guests.

Walt Disney World is gearing up for its 50th anniversary celebration, which will kick off on October 1, 2021. With this still being six months away, it is possible Disney could be ready to bring back nighttime spectacular, including Fantasmic!

Additionally, the 50th anniversary celebrations will run for a total of 18 months, so even if Fantasmic! does not return by October 1, 2021, the likelihood of the show returning sometime within the 50th anniversary celebrations is pretty high. With the celebrations going on until early 2023, we will more than likely see nighttime shows return by then. Inside the Magic will keep you updated as we get information regarding entertainment offerings at Disney World.

Please keep in mind this article is pure speculation and Disney has not announced when Fantasmc! or other nighttime shows will return. Inside the Magic will update you as we get information.

Do you miss nighttime shows? Do you think Fantasmic! will return in time for Disney World’s 50th anniversary in October? Let us know in the comments below.

Comments Off on Will Fantasmic! Open In Time For Disney World’s 50th?