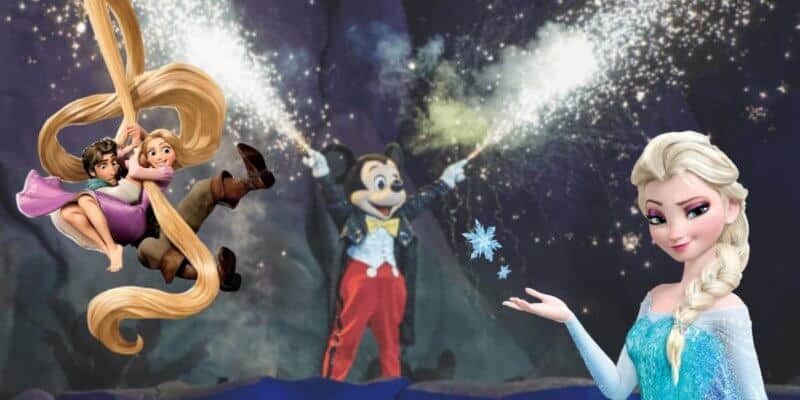 Fantasmic! at Disney’s Hollywood Studios is a beloved nighttime spectacular that tells the story of Mickey’s dream, where he is a sorcerer’s apprentice and can control water, color and magic. However, the Disney Villains soon take over and turn Mickey’s dream into a nightmare.

The unfortunate news is that for the past few months, Guests have not been able to watch Mickey’s dream as the Fantasmic! lagoon at Disney’s Hollywood Studios has been drained. This is because the theme park is not currently hosting the nighttime show due to the ongoing pandemic.

With this being said, before Fantasmic! returns to the theme park, should Disney World bring newer elements to the show and showcase more recent Disney films? Personally, I say yes, and here’s why!

Now, hear me out for a second. I am not saying let’s completely redo Fantasmic! — In fact, Fantasmic! is one of my all-time favorite shows at Walt Disney World and if they ever completely reimagined this nighttime spectacular, I would be completely heartbroken.

Instead, I feel as though Disney could get creative and incorporate some of the newer films, such as Moana, Frozen, Tangled, The Princess and the Frog, and Raya and the Last Dragon. Not only do these films have incredible animation and soundtracks, but the characters would appeal to a newer generation, bringing in more Guests each and every night.

All Disney would have to do is reimagine Mickey’s dream slightly to include some of these Disney characters and Princesses and the show could be taken to an entirely new level.

Picture this — During the section where the Disney Princesses come out on the floats alongside their Princes, what if Disney added one and Guests could spot Rapunzel and Flynn Rider dancing to “I See the Light”?  Or, Disney could add a whole new section where Elsa is spotted on top of the mountain, belting out “Let It Go” as she transforms it into her ice palace!

Again, these newer films have incredible characters, mind-blowing animation, and catchy songs that if Disney were to bring some of the elements of those films into Fantasmic!, it could appeal to an entirely new audience, allowing the show to last for years to come.

This is something that Disneyland actually did a few years ago — The shows at both theme parks are different and Disneyland’s version updated their storyline to include new scenes from Pirates of the Caribbean, Aladdin, and The Lion King. You can see the new scenes in our YouTube video below.

With this being said, it isn’t too far-fetched that Disney World could be thinking of doing something similar by incorporating some of the newer films including Frozen and Tangled.

At this time, Disney World has not announced a return date for Fantasmic!, but Inside the Magic will update you as we get information.

Do you think Disney should reimagine Fantasmic! to include more recent films? Or would you rather see it return just as it was? Let us know in the comments below.