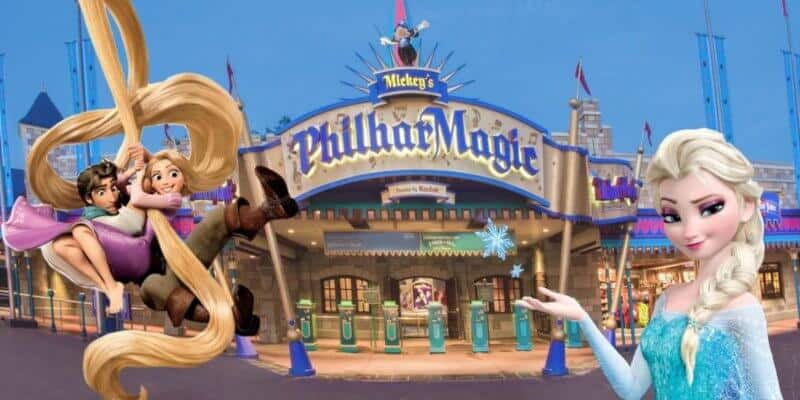 Mickey’s Philharmagic is certainly a classic attraction at both Walt Disney World Resort in Orlando, Florida and in Disneyland Resort in Anaheim, California. I don’t know about you, but it is easily a must-do for my family and I every single time we visit the parks. But as Walt says, “We keep moving forward. Opening new doors, and doing new things, because we’re curious and curiosity keeps leading us down new paths.”

This has got me thinking — Should Disney remaster its iconic Mickey’s Philharmagic attraction in both Walt Disney World and Disneyland?

The incredible 3D adventure stars some of our favorite classic Disney characters including Mickey Mouse and Donald Duck as they get ready to put on an incredible orchestra. However, Donald decides to put on Mickey’s sorcerer hat and things get a little out of hand.

Though, I absolutely love these songs and yes, they are all classics, I have been wondering if Disney should remaster this classic attraction with some new songs.

What if Donald got stuck with Dr. Facilier as he sings “Friends on the Other Side” in The Princess and the Frog? Imagine the vibrant colors and VooDoo masks popping up left and right in 3D while Donald gets immersed into Dr. Facilier’s song.

Another idea I would love to see incorporated would be floating down the bayou with Tiana, Naveen, and Louis as they sing “Gonna Take You There”?

Now, just take a second and imagine how hilarious it would be seeing Donald get stuck in the middle of The Snuggly Duckling singing “I’ve Got A Dream” with Rapunzel, Flynn Rider and the thugs in Tangled?

Or even better, just picture how beautiful those floating lanterns would look surrounding the audience in 3D as we watch Rapunzel and Flynn Rider both find their dreams as they sing “I See The Light”.

Of course, it’s safe to say the audience would freak out the second Elsa showed up on the screen as she belts out one of her iconic songs — Either “Let It Go” or “Show Yourself”.

Whether it be snow falling from the ceiling and Elsa builds her incredible Ice Palace on the North Mountain or we watch as Elsa sings “Show Yourself” as the beautiful color scheme of pinks, purples, and blues take over the screen.

Okay so I know Tarzan isn’t one of the newest Disney films, however, this is one of the most underrated Disney animated films out there which as the best soundtrack ever. Imagine swinging through the jungle with Tarzan and Jane as “Strangers Like Me” plays in the background.

Or imagine Donald gets stuck in the middle of “Trashin’ The Camp”?

All in all, I absolutely adore Mickey’s Philharmagic. As I have previously said, it is a must-do every single time I visit the parks. I just would love to see Disney update the attraction with some newer movies and songs. Disney is filled with iconic scenes from their films and I can only picture what Disney Imagineers could do with a little magic and pixie dust.