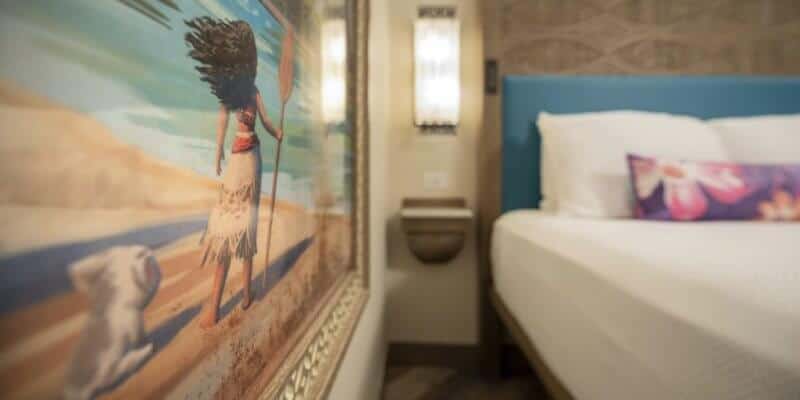 In case you missed it, Disney’s Polynesian Village Resort is undergoing a renovation as they are renovating rooms to include a “Pacific Ocean-inspired color palette” as well as details from Disney’s Moana.

You can now have a look at these brand new rooms courtesy of photos shared for the first time from Disney Parks Blog. Below you will see the images that will instantly transport you inside a newly reimagined Guest room at the Magic Kingdom Resort.

You’ll also see all-new furnishings and fixtures. In the bathrooms, for instance, Disney Imagineers took inspiration from the sandy ocean floor for the tiles and carved details in the vanity. The colorful patterns found throughout the room bring a whole new energy to the space, evoking undulating ocean waves and tropical flowers.

Disney Parks Blog continued to explain the details of the new Moana rooms, saying how Guests will be fully immersed by both real and imagined worlds:

This popular locale joins the other Disney Resort hotels of Walt Disney World in creating the Disney Resorts Collection, where the magic you find in the theme parks extends to every moment of your vacation. Disney Resort hotels offer you a wide selection of fantastic settings to choose from, inspired by worlds both real and imagined. You’re fully immersed in our legendary storytelling and guest service that extend beyond our theme parks to every moment of your stay, whether you’re visiting an African savanna, strolling a seaside boardwalk, see a favorite Disney character or so much more – there’s magic seemingly around every corner.

Disney Parks Blog also shared a short video that gives us a short walk-through of the upcoming renovated rooms at Disney’s Polynesian Village Resort via Disney’s TikTok account. You can check it out here:

The best news? Disney’s Polynesian Village Resort is now accepting bookings for late July 2021! Though Disney Parks Blog did not share specific dates, upon further investigation we found you can book beginning on July 19, 2021 using the recently announced 2021 vacation package offer, which you can read more about here.

If you need help planning, be sure to get in touch with our friends at Academy Travel. Get started today!

The Moana-themed rooms aren’t the only changes coming to this Magic Kingdom Resort hotel. In fact, the Great Ceremonial House at Disney’s Polynesian Village Resort is also undergoing some renovations as Disney Imagineers currently work on the dramatic overhaul there.

We already know that a new porte cochere is coming, which will showcase the 20th century architecture the Polynesian is famous for. Additionally, a new bold façade and a new monorail station will also be debuting at Disney’s Polynesian Resort in the near future.

Disney Parks Blog also gave us some additional information regarding the overall happening at Polynesian, writing:

The next time you pull up to the Great Ceremonial House, you’ll notice even more exciting changes we’re currently working on. The porte cochere is in the midst of a dramatic overhaul that will feature a high-pitched, open-truss roof covered in a thatch style with pops of color. Above the porte cochere, the Monorail station is receiving new wooden screens with tropical colors, adding to the open and airy vibe befitting of the South Seas.

If you want to book a stay at one of these newly renovated rooms, be sure to get in touch with our friends at Academy Travel. Get started today!