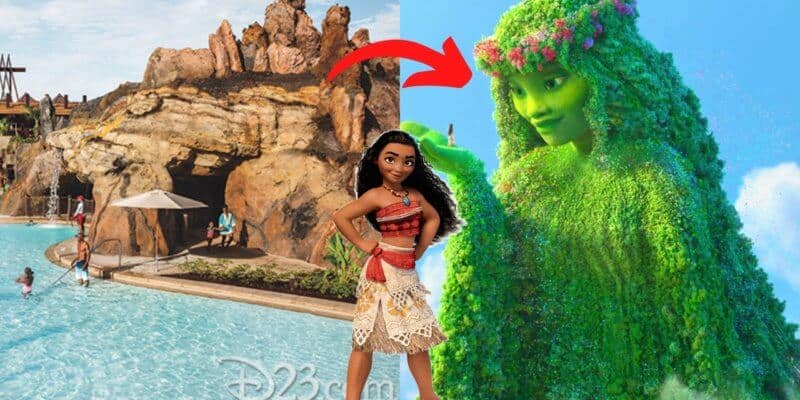 Disney’s Polynesian Village Resort has been undergoing extensive refurbishments as certain parts of the resort — including some Guest rooms — are being re-themed to Moana. Although Disney has not yet announced exactly how much inspiration the Resort’s overall renovation will take from the 2016 movie, we now can see that Disney has filed a permit to do some work on the Lava Pool at the resort.

The permit states that the pool will undergo “General Construction” under the lead of MLC Theming. Although this doesn’t give us too much to go off of in terms of what exactly is being done, there are some possibilities that point towards the Lava Pool becoming a heavily Moana themed area.

First off, Disney Resort pools are always heavily themed. If we look at Disney’s Polynesian Village Resort as it stands prior to any renovation, the Polynesian theming is heavily executed in the Lava Pool, with the volcano serving as the centerpiece, just like it might on a Polynesian island, sand surrounding the exterior, lush green plants, and palm trees encompassing you — it truly gives you a relaxing sensation, much like you would expect to have when at a tropical paradise.

If we want to look at a resort pool that uses a Disney IP, as Disney’s Polynesian Resort might be about to do, Disney’s Art of Animation is the perfect example. Although there are a few major Disney IPs at this resort, such as The Little Mermaid, Finding Nemo, Cars, and The Lion King, the themed pool sticks to one and does it exceptionally well. The Big Blue Pool is the resort’s main pool and is Finding Nemo themed, with giant versions of the characters surrounding you like you are a fish yourself — jellyfish are placed where one might typically expect a tree, ocean music plays under the water so you can always feel energy around you when you are swimming like a fish, and a zero-entry entrance which mimics walking into the ocean from the sand, as opposed to entering via stairs.

All of this being said, it wouldn’t be surprising if the Lava Pool at the Polynesian Resort took on Moana characteristics. The resort pool is actually already quite perfectly themed to transition to Moana as the volcano that stands could easily be refurbished become to Te Fiti (or Te Ka, if they want to give it a more villainous spin). I also would personally love to see some Hei Hei or Pua statues, as well as some Moana and Maui imagery!

For now, however, this is all speculation in terms of what will be changed in the Lava Pool as Disney begins construction. Stay tuned to Inside the Magic as we continue to follow what is going on at Disney’s Polynesian Resort as it gears up to be ready for Walt Disney World Resort’s 50th anniversary.

Planning your 50th Anniversary Walt Disney World Resort vacation? Our friends at Academy Travel are standing by ready to help you make it as magical as possible. Click here to begin planning and receive your free, no-obligation quote today!

Do you think Disney will re-theme Disney’s Polynesian Resort’s main pool to have a more Moana look?