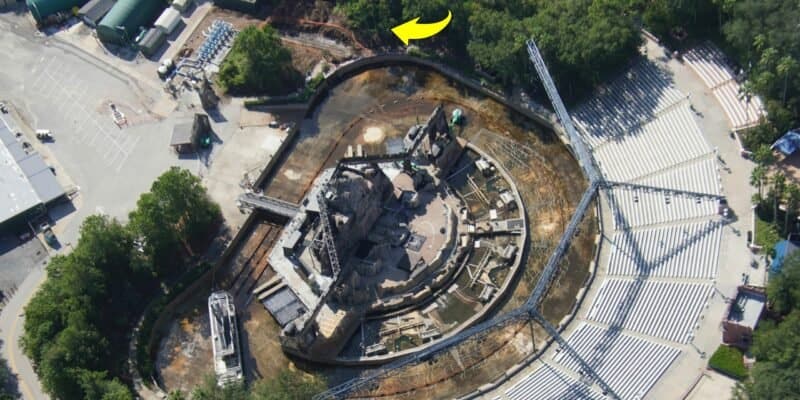 Due to the ongoing pandemic, Disney’s Hollywood Studios has not hosted the iconic nighttime show, Fantasmic!. At this time, Disney, unfortunately, has not announced a reopening for Fantasmic!, but thanks to some recent photos taken by bioreconstruct, we can see that the iconic ship has shifted positions — indicating the theme park may be gearing up to bring this fan-favorite show back!

Bioreconstruct shared a series of photos to Twitter, showing the current state of the Fantasmic! lagoon. In the first Tweet, we can see that the iconic ship has actually shifted positions, meaning that Imagineers are clearly working on this area of the theme park, though we are unsure of exactly what type of work is being done at this time.

Aerial look at Fantasmic. The ship has moved! Compare to previous Tweet in this Thread.

Arrow at an excavation.

Aerial look at Fantasmic. The ship has moved! Compare to previous Tweet in this Thread.

Arrow at an excavation. pic.twitter.com/x0OQjtNTMP

Bioreconstruct also shared an aerial photo of the Fantasmic! lagoon, which remains drained:

A straight-down aerial look at Fantasmic.

And lastly, bioreconstruct shared another view of the Fantasmic! lagoon, where you can also see the ship has shifted positions:

Aerial look at current work in Fantasmic. Among the recent changes is the ship has been moved.

Aerial look at current work in Fantasmic. Among the recent changes is the ship has been moved. pic.twitter.com/VrTs8U8He2