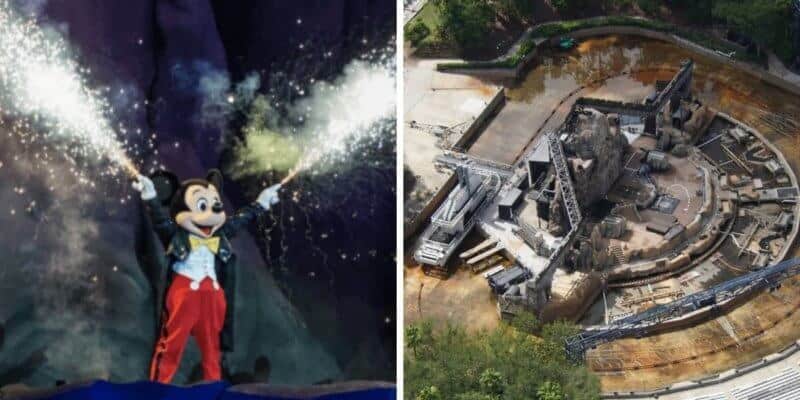 For the last year or so, the Fantasmic! lagoon at Disney’s Hollywood Studios has been drained as the theme park is not currently hosting the nighttime show due to the pandemic. Many are anxiously waiting for a reopening date of Fantasmic! as Disney recently shared that Happily Ever After at Magic Kingdom and EPCOT Forever at EPCOT will be returning on July 1.

At this time, Disney, unfortunately, has not announced a reopening for Fantasmic!, but thanks to Twitter, we have an updated look at the lagoon within the theme park.

Bioreconstruct took to Twitter to share an aerial photo showing the Fantasmic! lagoon, which is still drained. However, it is now collecting rainwater:

Aerial look at Fantasmic, which seems to be collecting rain water.

Aerial look at Fantasmic, which seems to be collecting rain water. pic.twitter.com/PYqZgi9GTy

Though the lagoon is still sitting empty, and this may not be the type of water many were hoping for, there is still some good news. In fact, Disney has been making strides towards a possible reopening of the nighttime show as several permits have been filed as of late.

At this time, Disney has not announced a reopening for Fantasmic!, but Inside the Magic will update you as we get information.