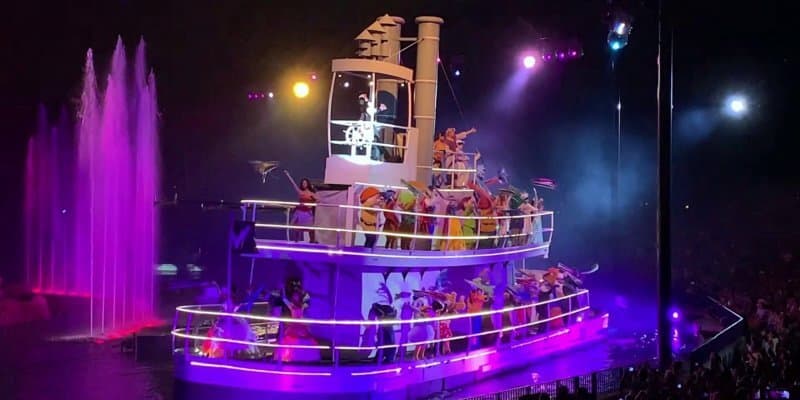 With the pandemic hit, so did many changes for the theme parks at the Walt Disney World Resort, including the loss of entertainment and nighttime spectaculars.

Disney’s Hollywood Studios, for example, had to put many of their shows on pause due to the safety concerns that come with creating a spectacle, with one of those shows being Fantasmic!.

After Walt Disney World reopened in July, Disney’s Hollywood Studios closed the Fantasmic! gates of the Hollywood Hills Amphitheater in order to stay in line with CDC guidelines, keeping the safety of Guests and Cast Members as number one priority. Since then, we have seen that the surrounding lagoon of the show has been fully drained, leaving Mickey’s dreams a thing of the past.

Now, it seems after being shut down for almost 11 months, Fantasmic! continues to remain drained. Bioreconstruct (@bioreconstruct) took to Twitter to post an updated view of the Fantasmic! the stadium, and it still looks bone dry.

Considering the lagoon has yet to change for months, and Mickey’s Steamboat has been unmoved, it seems that Disney is not in a particular rush to bring back Fantasmic! in the recent future. Shows such as Fantasmic! or Happily Ever After at Magic Kingdom are large crowd gathering areas, which would possibly eliminate the ability to social distance. Therefore, although some things have begun to return to normal at the Walt Disney World Resort such as Park Hopping, there are still many offerings that are not ready to return.

That being said, there are few reasons why Guests can continue to stay optimistic about Fantasmic!’s return. The Fantasmic! pre-show music continues to blast from the Hollywood Hills Amphitheater, which is a constant reminder that the show exists.

Additionally, the My Disney Experience app updated the Sorcerer Mickey on the Fantasmic! stage. If Disney were planning to not bring back the show, they likely would not be updating its image on the MDE app, therefore, we can continue to patiently wait and hope for the nighttime spectacular to return.

And in the meantime, you can watch a short video of Fantasmic! at Walt Disney World here:

Stay tuned to Inside the Magic as we continue to update you all returning offerings at Walt Disney World!

Do you miss Fantasmic!? If there is one show you could bring back at Disney, what would it be?