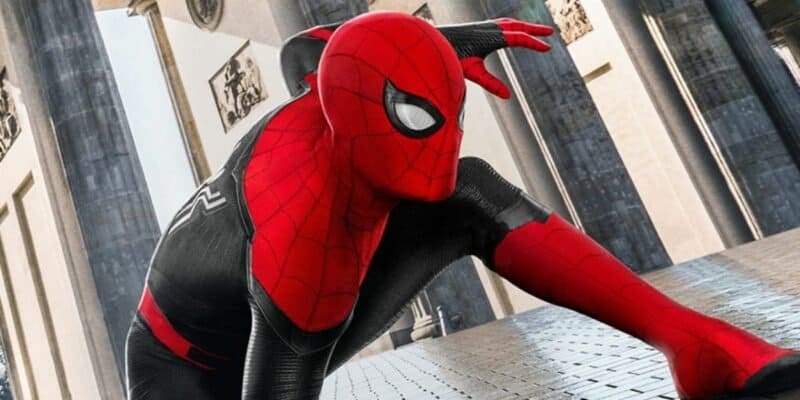 Actor Tom Holland’s run with the Marvel Cinematic Universe is coming to a close this December with Spider-Man: No Way Home (2021), the sixth and final installment in his Spider-Man run.

In August 2019, Sony temporarily walked away from Disney and the Marvel Universe with Spider-Man after the two companies failed to reach an agreement over box-office revenue takes, merchandising rights, and future projects with Spidey. Sony/Disney met a new deal with Spider-Man a few months later, but it’s up after No Way Home releases.

However, new reports and confirmed sources suggest that Disney is reportedly in talks with Sony over a film division buy-out, or even a purchase of the entire company — similar to what happened with 20th Century Fox/20th Century Studios — for the film rights to Spider-Man.

According to a new rumor:

It sounds like Disney is possibly offering to buy out Spider-Man rights, or buy Sony’s film division, although our source said they are considering buying Sony, which doesn’t rule out a merger/acquisition. Keep in mind that Sony, as a company, is very large and has a large hold in gaming. This will also complicate any deal the two companies settle on since Sony owns a lot of Spider-Man games, as well as other properties. If Disney manages to make a deal with Sony for Spider-Man and the surrounding characters, that deal is going to be very complicated and many pages long in the end.

In the late 1990s, when Marvel was on the brink of bankruptcy, Marvel Comics sold the film and merchandising rights to Sony Pictures. Marvel was so desperate that they offered Sony the rights to other popular Marvel characters and Earth’s Mightiest Heroes like Iron Man, Captain America, Black Panther, Captain Marvel, the Winter Soldier, and Doctor Strange — but they only cared about Spidey.

Sony never worked with Marvel head Kevin Feige in a big-picture manner for Tobey Maguire‘s Spider-Man franchise or Andrew Garfield’s The Amazing Spider-Man films, but seeing what great power the Marvel character could bring to the MCU, Disney/Marvel came into the picture.

Related: Marvel Finally Reveals its Next Big Villain and Fans Have Thoughts

Since there has been no confirmation of this acquisition even being on the table from Kevin Feige’s Marvel Studios, Sony, or Disney, these rumors should all be taken with a grain of salt.

Should any of this rumor turn out to be true, it seems most likely that Disney could be in talks with corporate leaders about acquiring Sony’s film division, thus allowing them to attain the rights to Spider-Man, but that too would presumably be a multi-billion dollar investment.

Since then, the Avenger has stayed relatively on the sidelines as super soldier Sebastian Stan (Bucky Barnes) and Tom Hiddleston (Loki) helped introduce Phase 4 of Marvel with tv shows The Falcon and the Winter Soldier and Loki, respectively.

Now, with Marvel films Eternals (2021) and Shang-Chi and the Legend of the Ten Rings (2021) coming to theaters this Fall, the adventure of Spider-Man will come together in an episodic manner with Spider-Man: No Way Home in December 2021.

While the Spider-Man merchandising revenue greatly outweighs that of box office revenue, Marvel fans should keep their ears open to Disney’s possible future with Sony and Spider-Man, especially if the companies can agree on a new contract for Tom Holland’s involvement in the MCU.

Every Marvel fan, get ready to watch Spider-Man: No Way Home in theaters on December 17, 2021, and see Marvel’s multiverse expand like never before!

Do you think Disney should buy Sony for Spider-Man rights? Let us know in the comments below!