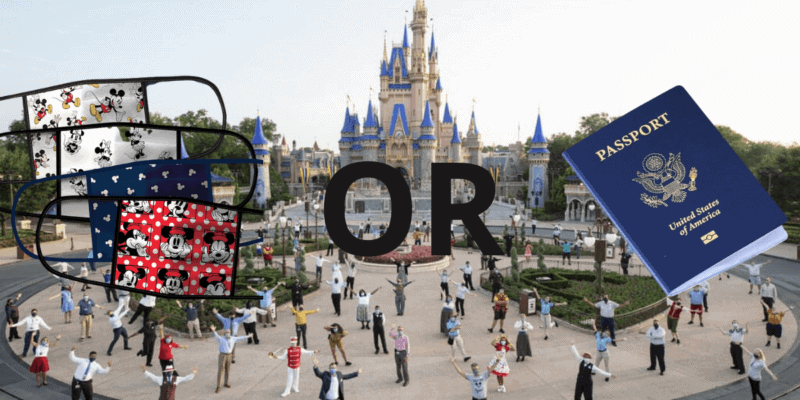 When Disney World reopened last summer following its pandemic-related closure, all Guests age 2 and over were required to wear face masks, except while actively eating or drinking in designated dining areas. Disneyland Resort followed suit when it reopened in April 2021. Both East and West Coast Parks have since ended their mask mandates, as well as their social distancing guidelines and temperature checks.

Both Disneyland Resort and Walt Disney World felt comfortable rolling back their health and safety protocols because the CDC updated its guidelines due to a decrease in overall COVID-19 cases and an increase in vaccination rates.

Unfortunately, a new, highly contagious, COVID variant — known as the Delta variant — is on the rise. There has been a dramatic rise in COVID cases in certain regions of the country — including Florida –, and hospitalizations are also increasing. These changes could result in the Disney Parks reevaluating their health and safety procedures, although it is important to note that no official statements have been made by The Walt Disney Company at this time.

Disneyland Paris recently announced that, in addition to their mask mandates, they will also be requiring Guests to present a Health Pass — which will prove that they are either vaccinated, had a negative COVID test within 48 hours, or had a positive antigen test (meaning they have COVID antibodies) — before they enter the theme park property. Disneyland Paris instituted that policy after France announced a similar policy for visitors traveling to the country.

The sharp rise in cases in the United States could cause Disney to rethink its current guidelines. It is important to note, again, though, that at this time, Disney has not made any statement about changing its mask guidelines.

However, Inside the Magic decided to poll our readers to see what they would prefer. We asked, “If Disney had to change its health protocols, which would you rather see – a mask mandate or a vaccine passport like Disneyland Paris has?”

In just about 3 hours, there were almost 600 comments as our readers debated over which they would choose. A large number of our readers seemed to prefer vaccine passports. Both Disneyland California and Walt Disney World are located in warm climates where face masks can become uncomfortable, so they would rather not wear a mask if there was a way to avoid it.

Facebook user Matt J. thought that there should be a combination of both, saying:

Janelle M. also believes that a passport would be best, but does not think Disney will make that decision, in which case, she would still like to see a mask mandate:

Vaccine passports. But since they will never do it, mandatory masks. At least until things are better and kids under 12 are eligible to be vaccinated, should their families choose it.

Rybeth S. felt that a passport would be best, especially because children under 12 cannot be vaccinated at this time, so it is important to keep them safe:

While many of our followers would prefer a vaccine passport if Disney makes any policy changes at its domestic Parks, there were also those who decided that they would rather have masks. Some preferred them simply because they are leery of the new vaccine and its potential side effects.

Linda S. opted for masks since she said they were much easier for people since many are already used to wearing them, and it also protects people who are unable to receive a vaccination:

Face mask – while I think people should choose to get vaccinated for their own health and to guard the health of others, there are people for a variety of reasons aren’t able to get vaccinated. But nearly everyone can wear a mask.

Ruth L. also chose masks, due to the fact that there are no known side effects to wearing one. People who have received vaccinations have reported side effects from mild soreness and tiredness to more extreme effects that mimic the virus itself:

Face masks, they don’t give you any side effects.

The main reason some readers felt both were necessary was that children under 12 cannot be vaccinated right now and would then have to wear a mask. Children under the age of 2 are generally not asked to wear masks or given COVID-19 tests unless extreme circumstances arise.

There is also the chance that Disney will feel that they do not have a choice but to reinstate some mandates. In Los Angeles County, CA — which is near Orange County, CA where Disneyland Resort is located — an indoor mask mandate was brought back after COVID cases jumped. That meant that Universal Studios Hollywood had to tell Guests, both vaccinated and unvaccinated, that they would be required to wear masks indoors once again.

At this time, Orange County has not brought back a mask mandate, but it is possible that it could change.

Florida Governor Ron DeSantis never instituted a statewide mask mandate, but Disney World followed the guidance of the Centers for Disease Control (CDC) when it came to its health and safety procedures. If the CDC changes its current guidance on masks, then Disney World could follow suit.

All Guests can do is keep an eye on the current state of COVID cases and continuously check the Disneyland Resort and Walt Disney World Resort websites to confirm health guidelines. Inside the Magic will also keep readers updated should any changes be made at the theme parks.

Would you visit Disney Parks if they required masks or vaccine passports? Let us know in the comments!