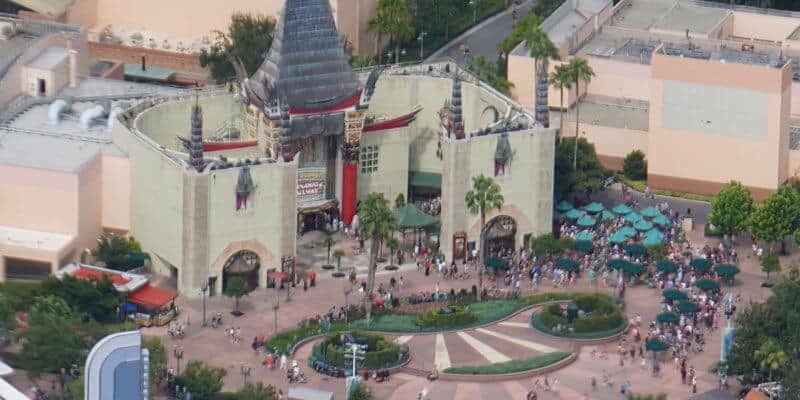 Despite the theme parks at Walt Disney World phasing out social distancing, long lines are continuing to form. In fact, the queue for Mickey & Minnie’s Runaway Railway at Disney’s Hollywood Studios has been extending outdoors pretty frequently.

This ride draws crowds every single day as fans cannot wait to experience this unique attraction for themselves. With this being said, the queue for Mickey & Minnie’s Runaway Railway tends to build up. When social distancing was in place, families had to stand six feet apart making the queues at Disney World typically extend far from the ride itself. This made it look like the line was longer than it actually was.

However, despite social distancing being phased out at the theme parks, the line for Mickey & Minnie’s Runaway Railway is still extending decently far outside of the Chinese Theater.

Bioreconstruct (@bioreconstruct) took to Twitter to share an aerial photo of Center Stage at Disney’s Hollywood Studios. Within the photo you can clearly see the line for Mickey & Minnie’s Runaway Railway extended outdoors:

With all of this being said, if you have an upcoming Disney World vacation, expect to see a bit more “normalcy” compared to last summer when the theme parks first reopened after temporarily closing due to the ongoing pandemic. As the world continues to fight the ongoing pandemic, Walt Disney World has been adjusting its safety protocols that were put into place last summer. If Guests visit one of the theme parks in the near future, they will notice a relaxed face mask protocol, reduction in social distancing, increased capacity, and more.

When speaking to the capacity levels specifically, it wasn’t long ago that Disney CEO Bob Chapek confirmed the theme parks have already started increasing capacity once again, which you can read more about here. At this time, we do not know exactly what percentage of capacity Disney World is operating at, but we know it is higher than 35% — And you can see from the crowds and long lines, the capacity increase is obvious.

If you are planning on visiting Disney World on your next vacation, be sure to familiarize yourself with the current safety protocols at the theme parks. You can view them by visiting the official Walt Disney World website here.

Mickey & Minnie’s Runaway Railway is a trackless theme park ride at Disney’s Hollywood Studios that features effects and sounds like no other Disney attraction. This is the first-ever Disney theme park attraction that is based around Mickey Mouse himself! In case you haven’t yet had the chance to ride, Guests will enter the Chinese Theater, which serves as “the magic portal”, meaning they will instantly emerge into Mickey’s Toontown.

The official description of the ride reads:

Have you ridden Mickey and Minnie’s Runaway Railway? What’s the longest you waited in line? Let us know in the comments below.