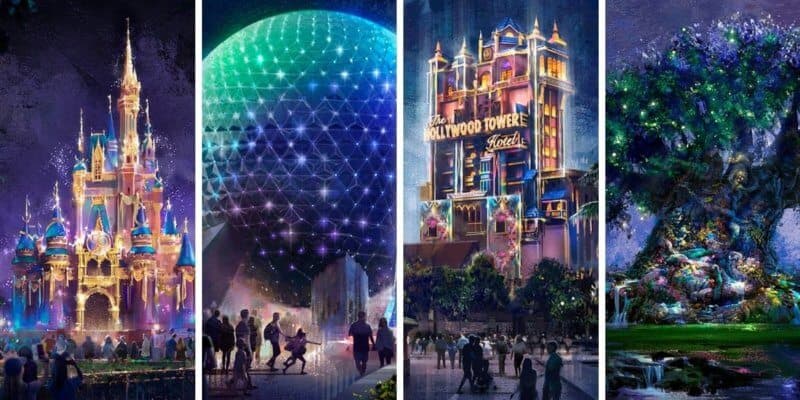 On October 1, 1971, Walt Disney World opened to the public for the first time with its first theme park — Magic Kingdom — and before we knew it, it became one of the most popular vacation destinations around the world. And now here we are, almost 50 years later!

Walt Disney World is bringing the festivities for this major milestone to all four of its theme parks — Magic Kingdom, EPCOT, Disney’s Hollywood Studios, and Disney’s Animal Kingdom. Known as “The World’s Most Magical Celebration,” Disney World will begin its anniversary festivities on October 1, 2021 to commemorate exactly 50 years since Magic Kingdom first opened its gates in 1971.

As many already know, a Disney Park Pass plus a valid theme park ticket are required in order to visit a Disney World Park at this time. With this being said, Guests are eager to secure their spot at one of the four theme parks — Magic Kingdom, EPCOT, Disney’s Hollywood Studios, and Disney’s Animal Kingdom — for the day of the 50th anniversary.

However, if you are an Annual Passholder, we have some unfortunate news as all four Disney Parks have hit their limit on Park Passes for October 1.

Previously, we reported that Magic Kingdom, EPCOT, and Disney’s Hollywood Studios were booked, leaving availability for Animal Kingdom; however, as you can see in the screenshot below, all Park Passes for all four theme parks are now booked for Annual Passholders for October 1, 2021.

Related: Will the WDW 50th Bring Back Guest-Favorite Amenities?

The good news is that this celebration isn’t just going to last one day. In fact, it’s not even going to last just one full year — it’s going to be going on for a total of 18 months! So if you are an Annual Passholder and weren’t able to score a Park Pass reservation for October 1, 2021 — You will have plenty of time to visit the Disney World theme parks and celebrate the 50th anniversary.

It is also important to note that Disney World may add more Park Pass availability as capacity could continue to increase. Additionally, as some may cancel their Park Pass reservations, more spots could open for others. Keep checking the official Walt Disney World website for the most up-to-date availability.

Guests are eager to check out what Walt Disney World brings to the table for the big 50th anniversary celebration, which will begin on October 1, 2021 and run for 18 months!

Keep in mind, as Disney has shared in the past — If you want to visit a Walt Disney World theme park, such as Magic Kingdom, EPCOT, Disney’s Hollywood Studios, or Disney’s Animal Kingdom, you will need a Park Pass along with a valid ticket. At this time, there is no reservation required for Disney Springs — Disney World’s outdoor shopping and dining district.

Currently, Disney Park Pass reservations have been extended into 2023.

Are you an Annual Passholder? Did you grab a Disney Park Pass for October 1, 2021? Let us know in the comments below.