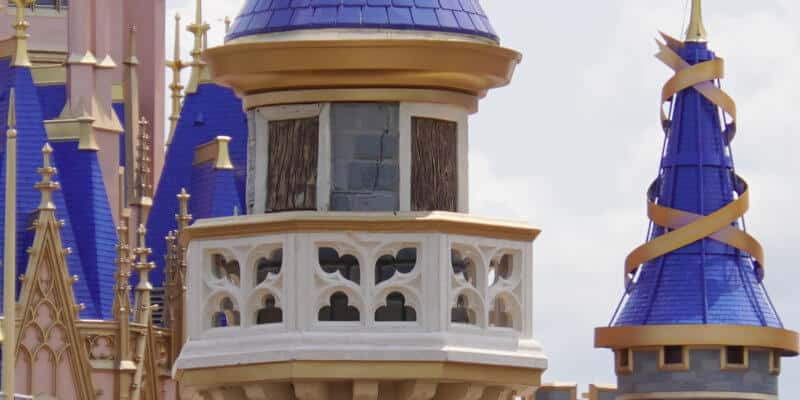 The 50th anniversary at Walt Disney World is just a few months away and Imagineers have been working hard on the theme parks getting them ready for the big milestone.

We have already seen the Tangled-themed restrooms, parts of Fantasyland including Prince Charming Regal Carrousel and Beast’s Castle, as well as Casey Jr.’s Soak ‘n’ Splash all receive construction work recently, but one of the main projects Guests have been watching unfold is the repainting of Cinderella Castle and the Fantasyland turets.

Back in February, Disney announced that in honor of this year’s 70th anniversary of the Walt Disney animated film Cinderella, the castle in Magic Kingdom would be repainted with a gorgeous pink painting and gold detailing. And for the 50th anniversary, Cinderella Castle would continue to receive a royal treatment — complete with added dramatic draperies and decorations specifically for the anniversary celebration, which will begin on October 1, 2021.

Since both of these announcements, Guests have seen construction workers continuously moving forward with the project each and every day inside Magic Kingdom. In fact, just a few days ago, Imagineers placed the 50th crest onto the front of Cinderella Castle, marking the completion of the project!

Though, this construction project didn’t always go as smoothly as some had hoped.

In case you missed it, we previously wrote about how one of the diamond jewels that was placed on Cinderella Castle for the 50th anniversary had fallen off the theme park icon. The good news is that it has since been repaired; however, now we are seeing some issues in another section of the park — cracking in a Fantasyland turret.

Bioreconstruct (@bioreconstruct) took to Twitter to share a photo of one of the turrets in Fantasyland, with visible cracking:

At center, some cracking in a Fantasyland turret.

At center, some cracking in a Fantasyland turret. pic.twitter.com/jPWD0w9uNO

This cracking, unfortunately, takes away from the beautiful scenery that the Imagineers had worked so hard on. At this time, the crack has not been repaired; however, the good news is that when the diamond jewel fell off of Cinderella Castle, it was replaced within a timely manner.

Stay tuned to Inside the Magic as we get more information surrounding Walt Disney World’s 50th anniversary.

Have you visited Magic Kingdom recently? Have you noticed the cracking in the Fantasyland turet? Let us know in the commnets below.