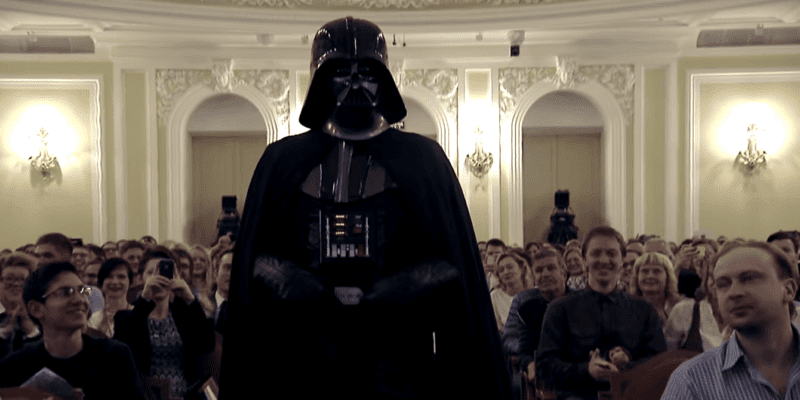 If you attend a classical music concert, one of the last things you probably expect to see is an invasion by the Star Wars Galactic Empire. And yet, that’s exactly what happened to some unsuspecting concertgoers in Russia recently when Darth Vader and two stormtroopers crashed their evening out.

As the Russian State Cinema Symphony Orchestra paused between movements, the ensuing silence was unexpectedly broken by the distinct sound of deep breathing.

Glancing over their shoulders in confusion, the crowd were greeted with three intimidating concert gatecrashers: two stormtroopers and one of cinema’s most legendary villains… Darth Vader himself.

The appropriate response to a Sith Lord taking a seat at your concert?

Above, you can watch a full video of Darth Vader’s fashionably late arrival to the symphony’s performance at the Moscow State Tchaikovsky Conservatory. As noted in Classic FM’s coverage, conductor Sergei Skripka responded to the invasion from a galaxy far, far away with aplomb, launching into the Imperial March on cue.

It is not known if this cameo appearance was planned, though it likely was given the elaborate Death Star-themed light show that ensued — but it was certainly a surprise to the attendees!

The entire crowd at the concert burst into applause during Vader’s entrance, clearly — and somewhat ironically — delighted by his appearance.

One thing is certain, this is an experience these classical music lovers won’t soon forget!

One of the most iconic characters in the entire Skywalker Saga, the official Star Wars Databank describes the Dark Lord of the Sith as:

Once a heroic Jedi Knight [the Chosen One Anakin Skywalker], Darth Vader was seduced by the dark side of the Force, became a Sith Lord, and led the Empire’s eradication of the Jedi Order. He remained in service of the Emperor — the evil Darth Sidious — for decades, enforcing his Master’s will and seeking to crush the fledgling Rebel Alliance. But there was still good in him…

In George Lucas’s Star Wars original trilogy, the Sith Lord was played by British actor and bodybuilder David Prowse and voiced by the iconic James Earl Jones. In the prequel trilogy, Hayden Christensen portrayed Anakin Skywalker as he descended into Darth Vader.

Christensen is set to reprise his role in the upcoming Deborah Chow special event series, Obi-Wan Kenobi (2022). Ewan McGregor will also return as Jedi Knight Obi-Wan Kenobi in the show that will take place on Tatooine approximately ten years after the events of Star Wars: Episode III – Revenge of the Sith (2005).

Have you ever had an unexpected encounter with a Star Wars character?