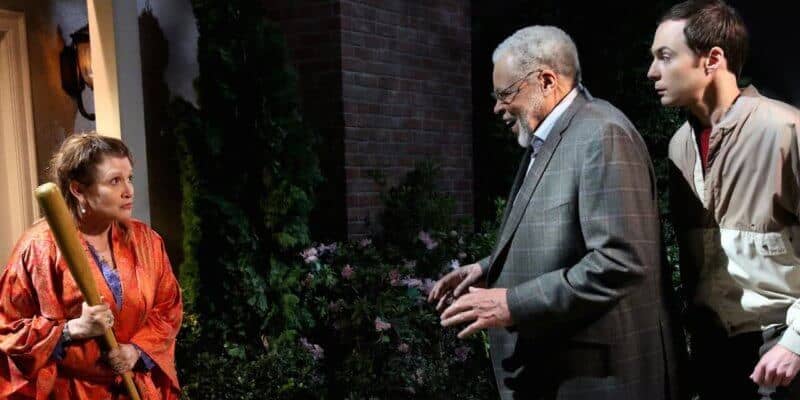 Through the years, fandoms like Star Trek — Sheldon is obsessed with Spock — and Star Wars played a big role in the group of friends’ lives. Star Wars icons like Mark Hamill (Jedi Knight Luke Skywalker), James Earl Jones (Darth Vader), and the late Carrie Fisher (Princess Leia Organa) even made cameos on the comedy series.

As it turns out, Parsons’s Sheldon Cooper was actually supposed to get very up-close-and-personal with a piece of Star Wars history, but the scene was ultimately cut.

In a resurfaced Conan interview, Parsons explained that he vetoed the idea. He quipped:

“They wanted me to wear the Princess Leia slave bikini and I said, ‘Thank you, but no’. No. And, they, or we, talked it down and I got a French maid’s uniform instead, which I considered a real deal. You know, it covered the midsection.”

Fisher, of course, famously donned her gold bikini in the final original trilogy film, Star Wars: Episode VI – Return of the Jedi (1983). Leia is wearing the iconic metal bikini when she kills Jabba the Hutt during the dramatic rescue of carbonite-encased Han Solo (Harrison Ford).

The bikini was set to be featured in The Big Bang Theory Season 5, Episode 21, “The Hawking Excitation”.

This episode is part of “12 Labors of Hercules” story arc in which Howard, true to form, forced Sheldon to do a number of absurd things in order to meet his idol, Stephen Hawking, who Howard was working for at the time. Sheldon continually obliged Howard’s whims on a desperate quest to meet the science scion.

Even though Cooper didn’t end up wearing a Princess Leia bikini costume into the CalTech cafeteria, the episode still ended up being a hilarious installment in the series.

You can watch Jim Parsons’s full interview with Conan O’Brien below:

Parsons is currently involved with the Young Sheldon prequel television series and is set to appear in the TV movie So Much later this year.

All 12 seasons of The Big Bang Theory are currently streaming on HBO Max. The service landed the streaming rights to the show — including the final season — in a five-year deal that was reached in 2019, even though it didn’t launch until spring 2020.

What do you think about this funny Sheldon Cooper story?