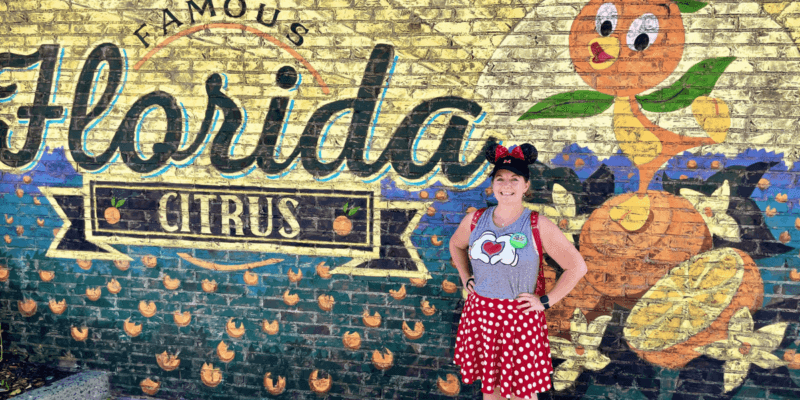 You don’t need a Walt Disney World Park Pass reservation to score amazing photos to share with friends and family. Head to Disney Springs for some often overlooked Instagram-worthy photo spots that will add a little magic to your social media pages. Whether you’re looking for the perfect selfie backdrop or a Holiday card family photo, get familiar with the best places to capture amazing Disney Springs photos in 2021.

Planning a trip to Walt Disney World in Central Florida can be a daunting task, especially if you haven’t visited in a while. Between the parks and resorts, the retail and dining offerings – things are constantly changing and evolving.

Perhaps the most important aspect of a Disney World trip is the potential impact the right photos can have on your social media cachet. With so much to do and see, having a plan of where to take the best pictures in Walt Disney World is absolutely essential for curating an Instagram feed that will put your Disney side on display for all the world to see — and envy.

Whether you’re a childless millennial, or all about rocking that #DisneyMom lifestyle, you should know the best Disney PhotoPass spots, Disney’s famous walls — like the Purple Wall in Tomorrowland, or the Bubblegum Wall in EPCOT — and have a game plan for hitting the perfect angle in your Disney fit. One slice of Disney property outside the parks that has become a can’t-miss destination for amateur photographers is Disney Springs.

What is Disney Springs?

Disney Springs is 120-acre dining, retail, and entertainment district curated and managed by The Walt Disney Company. The Disney Springs district has seen multiple expansions and rebrands since the concept was originally rolled out as Lake Buena Vista Shopping Village in 1975. Since the late 1980s, the area has seen massive amounts of investment as Disney sought to keep Guests entertained on Disney property even beyond the gates of the parks.

In 2015, the area then known as Downtown Disney became Disney Springs. Touting world-class cuisine, themed-family restaurants like T-Rex and Rainforest Café, unique shopping experiences like the world’s largest Disney Store, World of Disney, and live entertainment like Cirque-du-Soleil and much more, Disney Springs has become a popular tourist destination in its own right.

What are the most popular spots for Disney Springs Photos?

The Orange Bird has developed an almost cult-like following in recent years. The character was first dreamt up by Disney as a mascot used to promote Disney’s partnership with the Florida Citrus Commission — sponsors of Disney World’s Enchanted Tiki Room in 1970. When that partnership fizzled in the late 1980s, the Orange Bird was effectively scrubbed from Disney Parks. Years later, in 2004, the kitsch character was revived by fandom in Tokyo Disneyland. Merchandise featuring the adorable retro character became a hot commodity, and Orange Bird’s popularity soon spread back to the United States.

In 2019, Disney Springs added the now-famous Orange Bird mural just around the corner from Erin McKenna’s Bakery. Since then, if you don’t snap a pic of the Orange Bird wall it’s almost like you didn’t even go to Disney Springs.

“There are a lot of “WALLS“ with art at Disney. Of all the walls at Disney the Orange Bird Wall is my favorite!”

On the deck of The BOATHOUSE

The BOATHOUSE is an upscale nautical-themed restaurant that sits right on the waters of Lake Buena Vista. With plenty of outdoor seating on a large deck, three outdoor bars, and a boardwalk that connects it all, this is the best spot to grab a sunset snap of you and your friends — or just you, your drink, and your lobster roll.

Check out this awesome golden-hour shot by kenleybrooke.

Billed as a “classic” donut shop, this place is anything but. With its made-for-Instagram donut offerings, insane cold brew upgrades, and even a donut burger, Everglazed made a huge splash when it arrived in Disney Springs in January 2021. Outside the shop, you can take a selfie in front of their instantly iconic rainbowed storefront. Inside you’ll find a brightly colored donut mural perfect for posing with your over-the-top confection.

Sticking with the food photography theme, up next is Gideon’s Bakehouse — this devilish confectioner famous for its humongous, nearly half-pound cookies. Opened in late 2020, the highly anticipated Disney Springs location has been hugely popular — with a wait in a virtual queue usually required for entry. With an occult-adjacent macabre theming, the low-lighting in the interior of the shop doesn’t make for great photo opportunities for most camera phone sensors — plus that long line of hungry patrons behind you wants you to grab a cookie and go. No need to bother framing your face for Gideon’s pic, just get out of the way and get in tight on that beautiful behemoth cookie, and watch the double-taps come pouring into your Instagram.

The aforementioned World of Disney is the aptly named flagship Disney Store in Disney Springs Marketplace. It is absolute heaven for the Disney fanatic – boasting unreal merchandising displays from around the universe of Disney properties — Star Wars, Marvel Cinematic Universe, Disney Parks, Disney/Pixar, and lots more. The plush wall inside World of Disney rivals the plush wall of the world-famous Emporium in Magic Kingdom, with dozens upon dozens of Mickey and Minnie, stuffed animals lined up with awe-inspiring precision.

The real star backdrop here though is the seasonal merchandise display near the registers. There, you’ll always find the latest merchandise for Disney’s theme du jour — with holiday swag that will set the tone of your Instagram story for, say, your Halloween or Christmas Disney World trip.

Only bae can understand my anger issues

Are there PhotoPass photographers at Disney Springs?

There is an often overlooked Disney PhotoPass spot at Disney Springs — Disney PhotoPass Studio. You can walk right up to the indoor photography studio just like you would approach a Disney PhotoPass photographer in the parks. In other words, no reservation required. There is no cost for the photo session, but you’ll need to have a current Memory Maker package on your My Disney Experience account in order to download the photos. This means Annual Passholders can download these professional in-studio photos for no additional charge! The PhotoPass Studio is located next to the Ghirardelli Soda Fountain & Chocolate Shop in the Marketplace section of Disney Springs.

The Disney PhotoPass Studio can do a family photo with a traditional background, transport you to Disney Parks, or introduce you to Disney characters with eye-popping green screen backdrops. The studio is always changing out their background options, so it’s likely that you can expect some unique Walt Disney World 50th Anniversary backgrounds to be popping up soon.

Where are your favorite places to take Disney Springs photos? Let us know in the comments!