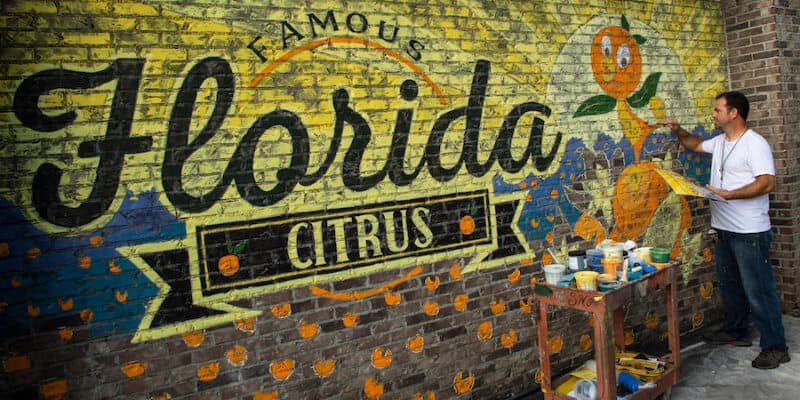 That’s because the new wall mural just around the corner from Erin McKenna’s bakery at Disney Springs features Disney’s adorable Orange Bird, the mascot for the Florida Citrus Commission. The Orange Bird was created 50 years ago in 1969 for the commission before Disney World had even opened, in exchange for their sponsorship of the Enchanted Tiki Room attraction at Adventureland at Magic Kingdom.

Disney Springs was the perfect spot for a wall featuring an Orange Bird-themed mural. After all, Orange Bird once had his own pavilion at the Lake Buena Vista Shopping Village, which is now Disney’s Pin Traders. The pavilion displayed fresh fruit from Florida.

The new wall at Disney Springs is the result of the creative juices that flowed when an otherwise unremarkable brick wall was noticed in Disney Springs. Artwork was inspired by vintage Orange Bird art. Then the new image was created and then projected onto the wall and traced with chalk. It was then painted in place by one of Disney Imagineering’s painters. Chris Weck, Art Director with Walt Disney Imagineering, says it took the painter one week to paint the entire wall, as he worked each day during daylight hours from 7:00 a.m. to noon.

The painting on the wall is expected to fade somewhat in the sunlight, giving the artwork an even more authentic look and feel–much like the “ghost graphics” seen on brickwork and in other places that seem to give a look of time passing and history.

Disney knows that fans of the parks are also fans of the Orange Bird, and they are excited to see how Guests interact with, and relate to, the new brick wall mural. So next time you’re visiting Disney Springs, be sure to stop by and take a few pics in front of the wall. Be sure to use the hashtag #DisneySprings when posting your photos!

Have you seen the new Orange Bird-inspired artwork on the brick wall at Disney Springs? Let us see your pictures of the new wall in the comments section below!