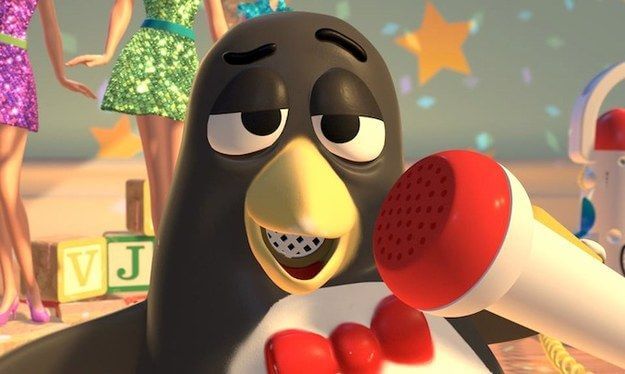 It’s no secret that Disney movie lovers everywhere have fun coming up with fan theories as they dive deeper into the stories we know and love. In fact, one theory suggests Elsa actually died in Frozen 2 while another connects both Aladdin and The Princess and the Frog to each other.

And now, another Disney movie fan is speculating on whom the real villain of Toy Story 2 is!

Reddit user TheCircleOfKnife believes that the adorable Wheezy wasn’t so adorable. In fact, they say that the character was way more mischievous than he appeared!

The post starts out explaining how a dream led them to start thinking that something wasn’t right about Wheezy. They go on to explain how even though Wheezy was not involved in the first Toy Story film, in the second film, it was stated that Wheezy had been up on the shelf for a few months prior to the movie’s start.

[…] This is important because it is stated in the movie that Wheezy has been up on the shelf for a few months prior to the movie. This means that Wheezy only got played with for 3-6 months at most before his speaker broke. It is also evident that Wheezy was one of Andy’s favorite toys during the time he was played with, and Andy had forgotten about him. This is a pretty bold statement, since Andy plays with his toys a lot.

So we now know that Wheezy was played with for a short time but was one of Andy’s favorites for a few months. Great, where does that lead us? Well we have to look at the behavior of our favorite squeaking penguin.

So when looking at the second Toy Story film, the Reddit user explained a secret plot that we may not have picked up on — one that involves jealous toys, which we know exist since that is exactly what the first film was about:

Toys can be jealous of one another. It was a main plot point in Toy Story 1, so it can easily be applied here. Wheezy was living the dream of any toy, being played with a ton. So how would he feel if something happened to him, and he was forced to watch Andy play with other toys for a couple of months? Jealous. It should be him up there along with everyone else, but instead, he has to watch, unable to intervene or get anyone’s attention.

This then leads us to the famous yard sale in Toy Story 2 — the yard sale that every toy is scared of, except, perhaps, Wheezy!

This sends him into a state of depression, clearly demonstrated when Woody finds him. He even says “What’s the point in prolonging the inevitable? We’re all just one stitch away from here…to there”. As he points to the yard sale.

The yard sale? It was Wheezy who discovered it! From the previous quote, we can tell that he doesn’t really care about whether he gets sold or not. Or does he? He makes no effort to even hide when Andy’s mom goes into Andy’s room looking for sell-able toys. Woody is the one who pushes him in between the books.

So what if Wheezy wanted Woody and the rest of the toys to notice the yard sale. Knowing how Woody is always the hero and saves his friends, Wheezy predicted the cowboy would do the same for him. The Reddit user continued to explain:

Wheezy has a plan: knowing Woody’s valiant heroic nature, he would definitely try to save Wheezy, and probably end up getting sold instead. What’s the worst that could happen? Wheezy gets sold to some other kid. Anything would be better than sitting on a shelf.

Throughout this whole sequence, Wheezy doesn’t even move. Even when Woody is saving him, he doesn’t do anything. But one moment really got me convinced. Wheezy is in Buster’s collar and is slipping, which prompts Woody to push him up, causing Woody to fall off of Buster which eventually gets him stolen by Al. Wheezy could have easily just put his arms outside and on top of the collar, so that he would be caught by his armpit preventing him from slipping. […]

So what does this say about Wheezy? He probably didn’t build an emotional connection to the other toys due to his short time being played with, which caused jealousy, and he is the main reason Woody gets toynapped by Al, and is completely aware of it. He really wants to be played with, and getting rid of Woody could help. Re-watching that scene, Wheezy does seem to exaggerate his emotions a bit. Maybe that part is just me.

At the end of the day, if this theory is true, Wheezy’s plan technically did work. In fact, Andy rediscovers Wheezy and he even gets a new squeaker! The Reddit user concluded:

So does it work? Yes, kind of. Woody does end up getting back, but Wheezy is re-discovered by Andy and even gets a new squeaker. By the end of the movie, he is no longer a jerk and just happy that he is back to normal. So I guess everything worked out, plus Jessie and Bullseye came, so Wheezy ended up doing more good than bad.

Everyone knows the villain of Toy Story 2 is Stinky Pete, also known as Prospector or Pete, and even some consider Al the toy collector and Emperor Zurg as the film’s villains, too. But did you ever think Wheezy would now be in the same category?

To me, this fan theory does seem a bit far-fetched as I don’t think Wheezy is really a villain. Could Wheezy have been a bit jealous? Of course, but wouldn’t you be feeling the same way if you were forgotten?

The important thing is that in the end, Wheezy is rediscovered, gets a new squeaker, and has the spotlight while singing “You’ve Got a Friend in Me” at the end of Toy Story 2.

Buzz, Woody, and their friends are back as Andy heads off to Cowboy Camp, leaving his toys to their own devices. Things shift into high gear when an obsessive toy collector name Al McWhiggin, owner of Al’s Toy Barn, kidnaps Woody. At Al’s apartment, Woody discovers that he is a highly valued collectible from a 1950s TV show called “Woody’s Roundup.” He meets the other prized toys from the show: Jessie the Cowgirl, Bullseye the Horse, and Stinky Pete the Prospector. Andy’s toys mount a daring rescue mission, Buzz Lightyear meets his match, and Woody has to decide where he and his heart truly belong.

If you want to stream any of the Toy Story films, be sure to sign up for Disney+. You can get started by clicking here.

What do you think? Is Wheezy the real villain in Toy Story 2? Let us know your thoughts in the comments below.