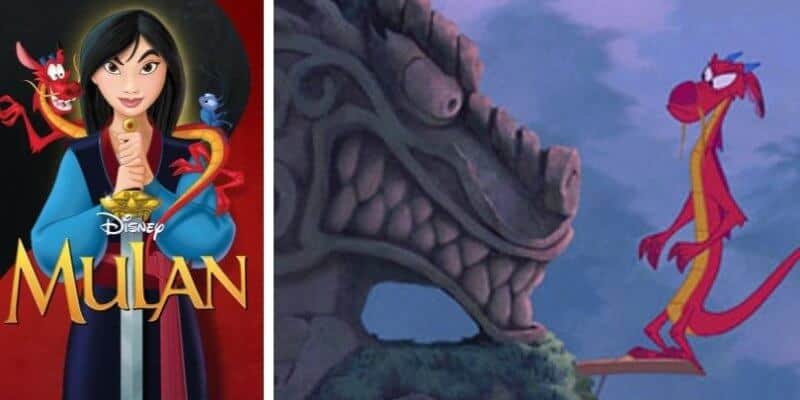 With the release of Disney’s newest live-action movie, Mulan, the classic Disney story has been revived. The story about the female warrior that saves China from the Hun invasion is one of the most empowering heroine films Disney has to date.

Of course, there are some differences when it comes to Mulan live-action version and the original cartoon. One that stands out very well is the absence of one of Mulan‘s sidekicks, Mushu!

Related: ‘Mulan’ Costumes and Props on Display at Disney World

Mushu is the former dragon guardian – more of a lizard than a dragon – of the Fa family. Mushu was demoted of his post of guardian after he failed to protect one of Mulan’s family members.

When Mulan decides to go to war to prevent her elderly father from going, and probably never returning home, Mushu is called upon by Mulan’s ancestor spirits to awaken the Great Stone Dragon to protect Mulan in her journey.

However, if you ever watched the original Disney animation, you know that Mushu failed miserably! He did not only not awaken the Fa family guardian, but he destroyed the stone statue that guarded Mulan’s guardian dragon.

And that is how Mushu ends up going after Mulan on her journey instead of the Great Stone Dragon.

But, did you ever stop to think why Mushu wasn’t able to awaken the Great Stone Dragon? A fan theory from a Tumbler post may shed a light on this question.

The theory says that Mushu wasn’t able to awaken the dragon because the dragon was already awake; it was Mulan!

If you carefully rewatch the original Disney princess animated movie from the moment that Mulan decided she will be going in her father’s place, you will see a succession of dragon imagery.

“The image of the dragon looking over Mulan is repeated several times throughout the sequence, and the bolts of lightning strike at significant times whenever the dragon is in sight. When Mulan takes her father’s scroll and when she is praying to her ancestors, the Great Stone Dragon can be seen. It is also engraved on the sword Mulan uses to cut her hair and the handles of the wardrobe containing the armor are in the shape of the dragon’s head. The dragon’s eyes glowing in the temple symbolizes Mulan’s role as protector of her family awakening, instead of the actual dragon,” says the Tumbler post.

This theory adds more strength to the already inspiring story of Fa Mulan!

Just like in novels, authors use metaphors and symbols to tell the reader about the meaning of a character, situation or as a foreshadowing of an event, the Disney animators used the powerful symbol of the Chinese dragon to tell the viewer that Mulan is the powerful dragon!

Compared to several classic Disney princesses, Mulan stands out because she completely goes against societal norms risking her own life to save her father, but also not depending on anyone to save her.

Mulan might not be a princess per se, she never married a prince, but amongst the classic Disney princesses stories, she is the strongest of the heroines!

Did you notice the dragon symbolism in Disney’s Mulan before? Do you agree with this Mulan fan theory? Is Mulan is the Great Dragon? Let us know in the comments below.