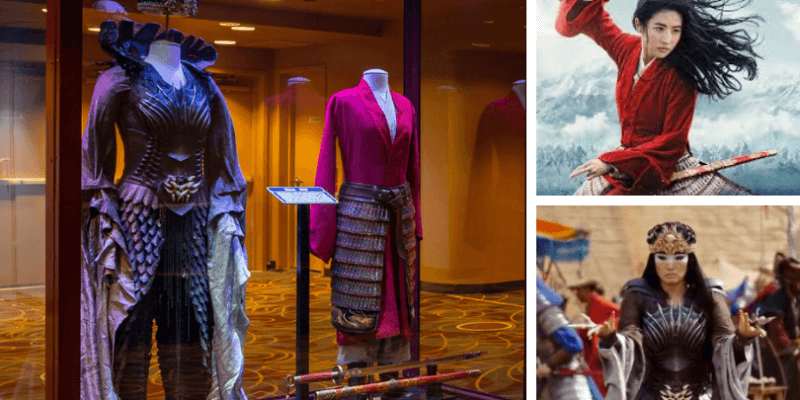 The wait is nearly over, and the live-action remake of Disney’s Mulan will finally be released tomorrow on Disney+ premier access. After waiting over five months past its initial scheduled release, Disney fans will not be able to enjoy the film for $29.95.

It is already known that the highly anticipated film has quite a few differences from its original version like the absence of Mulan’s love interest Li Shang and the replacement of Mulan’s sidekick Mushu. There is also a new character in the mix though, a witch named Xianniang, and it will be exciting to watch Mulan take her on.

While you can watch these Mulan and Xianniang face off on Disney+, you can take in both characters’ costumes in person, right now, at Disney’s Hollywood Studios.

“An ally of Böri Khan and the Rouran forces, Xianniang possesses special powers that are invaluable. But as the story unfolds, Xianniang learns that she has more in common with her young adversary Mulan than she realizes.” – Disney

This witch may be the evil villain of the movie, but her costume is both mysterious and stunning as Liu Yifei, who plays Mulan, describes it. This hand-stitched costume was the most time consuming and difficult to make as designers drew inspiration from hawks, bones, and feathers.

When discussing costumes, we can’t leave out the title character, Mulan. Yes, her costume is traditional Chinese, but it holds so much more meaning than that. Yifei praises the costume designers on how good they are for using color to tell the story. So much thought was put into the costume from Mulan’s costume from functionality for the story to having it still paint a beautiful picture on the screen. Her costume signifies just as much as her character does in representing the Chinese culture in the film, which is one of the reasons why it’s worth the $30 to watch the movie.

“The fearless and spirited eldest daughter of an honored warrior, Mulan is the apple of her father’s eye. When the Emperor mobilizes his troops to fight the onslaught of invaders from the North, she masquerades as a man to take the place of her ailing father under the name Hua Jun, setting her on an adventure that will transform her into a legendary warrior.” – Disney

For a short period of time, you can take a closer look at the costumes for both of these leading ladies at Walt Disney World Resort. If you have a planned visit to Disney’s Hollywood Studios in the near future, you should be sure to stop by the Animation Courtyard to check them out. Along with admiring these costumes and props, you can view a little snippet of the film! Disney Parks Blog also shared some behind the scenes information about the work that went into building these costumes.

“Filmmakers drew their inspirations for the design from a number of Chinese dynasties, including many elements from the Tang dynasty, which ruled China from 618 to 907. Colors, texture, and shapes all play key parts in the story and look of the film.

In total 40 people worked on the costumes over three months. Between three and five costumes were made for the 50 main actors, with over 1,000 costumes made in total. Fabrics were custom dyed and accented with hand embroidery and stitching adding to the authenticity.”

Together, these two costumes–both in the detail of their designs and how they complement their characters–are just one example of the time and attention to detail Disney has clearly put into making their latest blockbuster. We look forward to seeing them on our next visit to Disney’s Hollywood Studios.

What do you think about these costumes? Are you excited to watch Disney’s Mulan? Let us know in the comments!