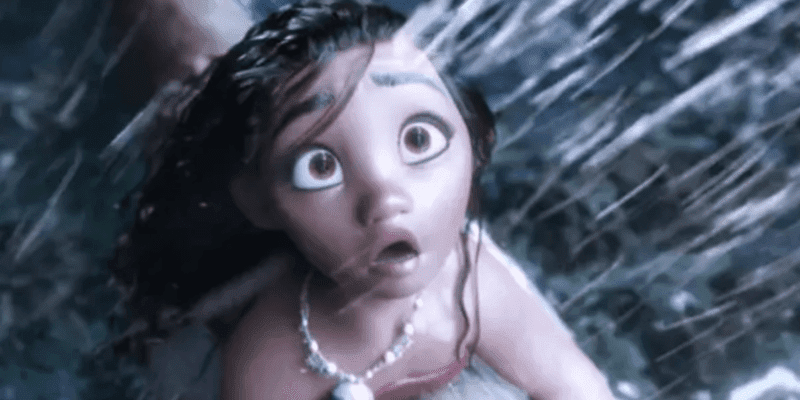 We all know that Moana — title character from Moana (2016) — is a fighter throughout her classic hero’s journey. After all, she braves the ocean, rescues a petulant demigod (we see you, Maui) to fulfill an ancient quest, learns to become a wayfinder, survives Tomatoa’s lair, and saves her people from near-certain death when their way of life is at risk of becoming obsolete.

What you probably didn’t realize, though, is that there’s a chance Moana was actually dead for her entire movie (at least until the very end).

One fan theory, shared by Occams-Toothbrush on Reddit, suggests that Moana actually died in the thunderstorm at the beginning of the movie. The social media user notes:

After that, she only meets Gods and mystical creatures [including Maui, the Kakamora, and Te Ka] he rest of the movie.

Also adding credence to this theory is that a human is not supposed to be able to reach Lalotai, the Realm of Monsters, as easily as Moana did, at least according to Maui. If Moana were not fully alive, however, perhaps she could have traveled to this otherworldly realm without much difficulty.

To play devil’s advocate for a moment, Moana does have contact with her parents, Chief Tui and Sina, and Moana’s grandmother, Gramma Tala, post-thunderstorm — but, intriguingly, the primary scene involving the whole family after the severe storm is Gramma Tala’s death.

During that particular scene, the older woman gives her necklace — Te Fiti’s heart — to the young girl. A necklace that, presumably, has the power to create life itself, since it is the only thing that can restore Te Fiti, thereby saving Motunui.

If, in fact, this theory that Moana was actually dead the whole time she was navigating the Pacific Ocean is true, it is theoretically possible that Gramma Tala — at death’s door herself — saw Moana and was able to physically give her the necklace that was then able to bring her back to life after she fulfilled her quest to deliver Maui “across the great ocean”.

It’s also worth pointing out that Moana‘s animal sidekick, Hei Hei, is present throughout her journey across the ocean. However, some believe that the chicken himself is a demigod who plays a crucial role in Moana‘s action packed voyage across Polynesia.

While somewhat far-fetched, this theory about Disney’s favorite born navigator is certainly intriguing and, actually, could hold water…

Moana movie fans have a lot to look forward to at Walt Disney World Resort in the coming months. Disney’s Polynesian Village Resort is undergoing a major refurbishment that includes Moana-themed rooms!

Spent yesterday morning checking out the new renovations at Disney’s Polynesian Village Resort. I’m always impressed by the attention to detail that goes into designing our parks and resorts, and the new rooms inspired by “Moana” deliver plenty of fun elements for our Guests to discover and enjoy from the animated film. Thank you to the team who welcomed me and our Cast Members for an exclusive “open mouse” of the refurbished rooms. We can’t wait to start welcoming Guests back to the resort this summer. #DisneyCastLife

Related: What’s Happening With the New ‘Moana’ Journey of Water Attraction at EPCOT?

Do you plan to stay at the new Moana-themed rooms at Disney’s Polynesian Village Resort? What do you think about this theory that Moana was actually dead for most of her Walt Disney Animation Studios feature film?