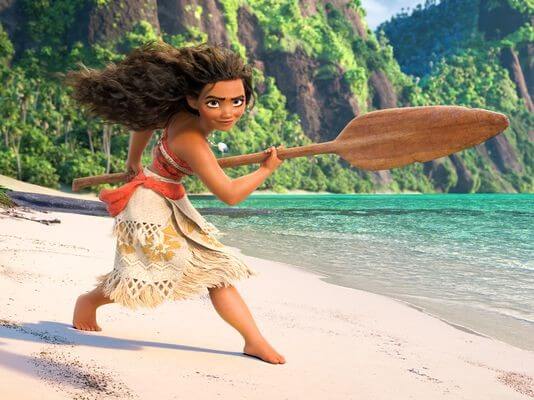 The upcoming Walt Disney Studios animated movie Moana will feature the adventurous teenager sailing out on a daring mission to save her people together with Maui, a confident shape-shifting islander who is a reluctant super hero. Moana’s parents are voiced by Temuera Morrison and Nicole Scherzinger. Moana’s father Tui is the typical overprotective parent who doesn’t really understand his daughter while her mother, Sina, is the peacemaker. The teenager’s grandmother shares her adventurous spirit and understands her quest more than anyone. Tamatoa is a comically villainous 50-foot crab from Lalotai, the realm of monsters, who will have a big musical number in the movie. A not-so-smart rooster that tags along on Moana’s journey and is voiced by Alan Tudyk. This cute little pig, which will surely be a merchandise hit, is Moana’s best friend.

We also got some new images of the two main characters. Both images showcases the brave nature of the main characters and as we recently reported, Moana will be no damsel in distress but a real heroine. Comments Off on PHOTOS: New ‘Moana’ character images and info released by Disney