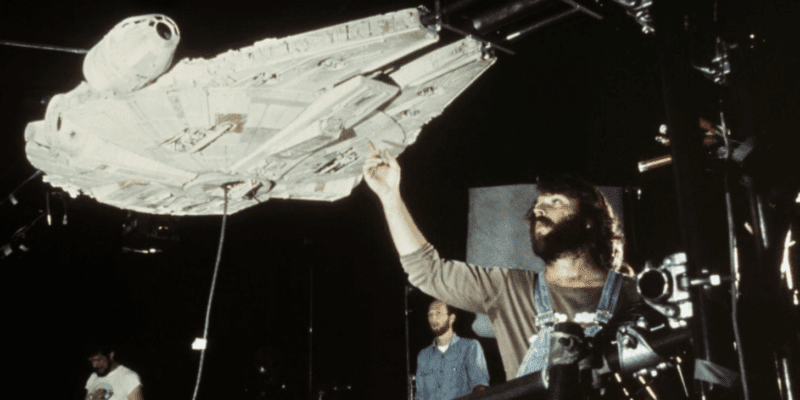 Star Wars creator George Lucas had a challenging time finding a film studio that was willing to back his first Star Wars original trilogy movie. To be fair, the original title of the inaugural Star Wars film was Adventures of Luke Starkiller, as taken from the Journal of the Whills, Saga I: The Star Wars, which doesn’t exactly reek of box office success.

After being turned down by both Universal Studios — with whom Lucas had worked on American Graffiti (1973) — and Walt Disney Studios, Lucas and producer Gary Kurtz were able to reach a deal with 20th Century Fox, who eventually (mercifully) released the film with the title Star Wars: A New Hope.

Soon after Lucas inked his Star Wars deal with Fox, however, he ran into a big snag. The studio had recently disbanded its entire visual effects department — a major problem for a movie that was set in a galaxy far, far away.

Thus, in 1975, the director formed Industrial Light & Magic, known simply as ILM, the visual effects company that would become known for its work on Star Wars, Indiana Jones, Back to the Future, Star Trek, Jurassic Park, Mission: Impossible, and many more. According to Empire of Dreams: The Story of the Star Wars Trilogy, the visual effects team pioneered the so-called digital motion control photography technique for Star Wars.

Over the course of over 40 years, the Star Wars universe has become synonymous with impressive visual effects, from that very first view of Tatooine in the opening sequence of A New Hope (1977) to the fleet scene at the end of Star Wars: Episode IX – The Rise of Skywalker (2019).

Featured in Disney Gallery: The Mandalorian, The Volume allows the Mandalorian crew to bring sets to life like never before, fully immersing both actors and viewers to Star Wars planets like Corvus, Trask, and, of course, Tatooine.

The Mandalorian team also used digital effects to bring Luke Skywalker back to the Star Wars story last year. The Jedi appeared as a CGI character — Mark Hamill’s face from the Return of the Jedi era was recreated for the season finale.

As Star Wars fans gear up for at least 11 upcoming streaming series, including The Mandalorian Season 3 and its three spinoffs, there are sure to be plenty of amazing intergalactic special effects headed our way thanks to ILM and The Volume — all because Fox axed its visual effects designers over four decades ago.

What do you think about Star Wars being made by a studio with no visual effects department? Do you enjoy Star Wars effects today?