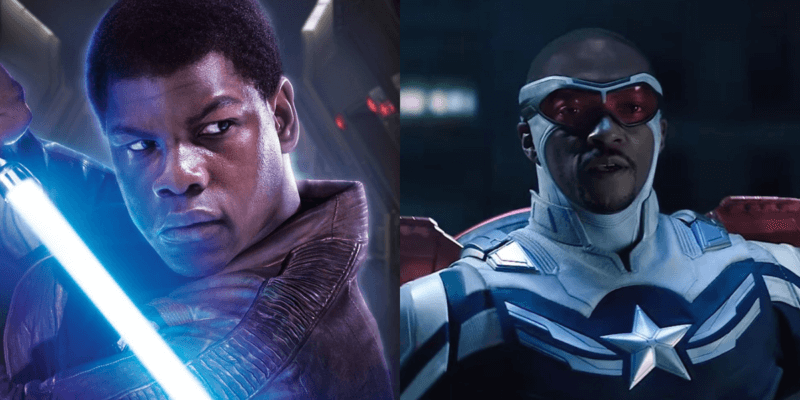 In an interview with NPR, John Boyega — who appeared as Finn in The Force Awakens (2015), The Last Jedi (2017), and The Rise of Skywalker (2019) — Boyega praises the Marvel Studios depiction of Sam Wilson (Anthony Mackie) in The Falcon and The Winter Soldier. Boyega points to the successful series, and the positive response it’s receiving from Marvel fans, as an example of how a studio can elevate a character by giving them moments that will captivate an audience.

Speaking of Captain America’s showstopping Mjölnir throwdown with Thanos (James Brolin) in Avengers: Endgame (2019) and the impact that Steve Rogers (Chris Evans) and his worthiness had on Marvel audiences, Boyega said,

Last Fall, John Boyega spoke out against Disney in a British GQ interview that made waves worldwide. The actor said he and his character Finn were mistreated by Disney and the Star Wars production team, by minimizing his storyline and casting him in a supporting role. Speaking of his Star Wars frustrations, he told the British GQ,

“What I would say to Disney is do not bring out a Black character, market them to be much more important in the franchise than they are and then have them pushed to the side. It’s not good. I’ll say it straight up.”

The Star Wars sequel trilogy was undeniably a huge break for John Boyega’s career, a point the actor acknowledges. As a leading characters introduced in 2015’s The Force Awakens alongside Poe Dameron (Oscar Isaac), Kylo Ren (Adam Driver), and main protagonist Rey Skywalker (Daisy Ridley), Boyega’s name was more well-known than ever. But this particular brand of limelight came with a cost. In another interview, John Boyega described his relationship to Star Wars and Lucasfilm as a”luxury jail,” explaining,

“Being in a big franchise, it’s kind of like luxury jail sometimes for an actor when you want to do something else. Because remember, in a franchise you’re working on one character for many years, which can starve your other muscles.”

Boyega said the Marvel Cinematic Universe streaming series The Falcon and the Winter Soldier has given Marvel actor Anthony Mackie an intriguing storyline as a hero coming to terms with what it symbolizes for a Black man to take on the mantle of Captain America. Giving Mackie’s Sam Wilson the trajectory of ascending into the Captain America role while his “co-worker” Bucky Barnes attempts to chase away the ghosts of his Winter Soldier past seemed like masterful storytelling to Boyega. The actor said of the series,

“We’ve got people now watching “Falcon And The Winter Soldier,” and a lot of people have been commenting about the elevation of Falcon’s character – right? – in the series and how they’ve really done well with bringing him up, which I also agree as well. You know, and we can see there is – that’s because you give characters these special moments, you know.”

A return to Star Wars seems unlikely for John Boyega following his last outing as Finn during 2019’s The Rise of Skywalker. Oscar Isaac has no plans to return to the franchise and is currently working on Marvel’s Moon Night Disney+ series. Daisy Ridley hasn’t expressed interest in returning to Star Wars any time soon, though rumors swirl that she is in early talks to return as Rey in some capacity.

Do you think John Boyega has a legitimate beef with the mishandling of Finn in the Star Wars sequel trilogy? Let us know in the comments!