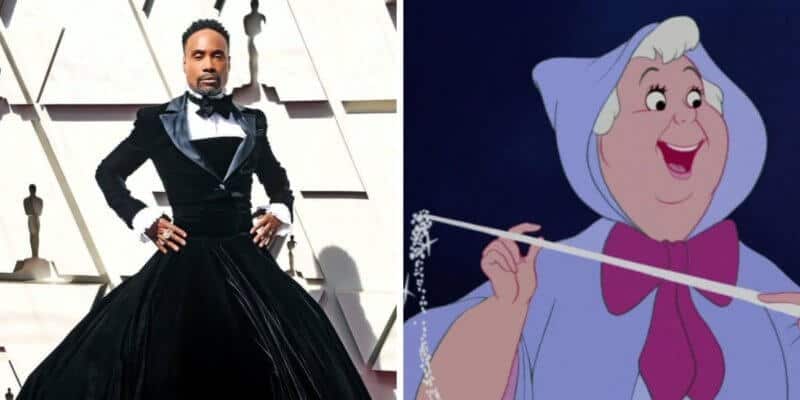 Last year we reported that a new adaptation of Cinderella will introduce a genderless Fairy Godmother. And now, we are pleased to reveal the first image of the new take on the iconic character.

Actor Billy Porter, who will be portraying the Fairy Godmother in the upcoming film, shared an image of the character for fans to enjoy, reaffirming that “magic has no gender”.

Related: You Can Win A Private Zoom Call With The Six Original Avengers! Link Inside!

Broadway star and actor Billy Porter looks stunning as a Fairy Godmother for the 21st Century. Speaking to Hello Giggles, the star suggested that he wants to encourage a more fluid approach to gender that challenges traditional norms:

“The gender conversation has exploded over the last decade or so. “Everyone is learning that gender has no boundaries. There’s the masculine, the feminine, and everything in between and on the outside of it.

These conversations are important and they’re being led by our young people, who are inspiring me and encouraging me to think beyond the boundaries of the binary”.

In light of these comments, take a look at Porter’s incredible new take on this classic character!

Porter was clearly excited, as he tweeted:

When can I see Fab G in the new Cinderella?

The new Cinderella adaptation is written by Kay Cannon. Additionally, it is based on a story by James Corden.

Cinderella will be a modern re-telling of the classic story with a diverse cast and the film has been described as a musical romantic comedy. It will feature a mixture of modern and original songs. Unsurprisingly, the pandemic caused significant delays to the film’s release schedule. However, it has now been confirmed to launch on Amazon Prime in September of this year.

Additionally, Cinderella boasts an exciting cast of familiar faces. Cinderella herself will be played by singer Camila Cabello, and Frozen star Idina Menzel will play her stepmother. Additionally, Pierce Brosnan, Minnie Driver, and James Corden will all co-star.

Of course, the cast will be joined by the one and only Billy Porter, playing the fabulous new genderless Fairy Godmother. Keep an eye on the film’s social media pages for when a trailer drops!

Cinderella and the Fairy Godmother go hand in hand

The Fairy Godmother appears in the Cinderella folk tale. However, Walt Disney Studios turned the character into a household name. In the original 1950 animated film, where she was voiced by Verna Felton. The live-action remake starring Lily James added a quirky spin to the character, as she was played by the iconic Helena Bonham Carter. This version also features Richard Madden as Prince Charming and Lily James as Cindy.

Additionally, the 1997 Rogers and Hammerstein adaptation saw the one and only Whitney Houston take on the role. That version also starred Brandy, Whoopi Goldberg, Paolo Montalban, and Jason Alexander.

However, we’ve never seen a genderless Fairy Godmother before! Billy Porter is sure to give Disney fans something new to appreciate in this new movie. It should be noted, however, that the film is a Sony production purchased by Amazon Prime, and is not affiliated with Disney.

What do you think about the genderless Fairy Godmother? Let us know in the comments below.