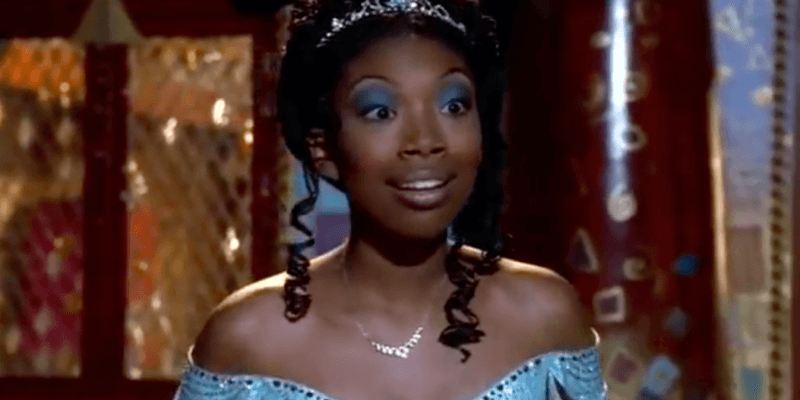 Just a few days ago, Inside the Magic reported that Rodgers & Hammerstein’s Cinderella is finally coming to Disney+.

Rodgers & Hammerstein’s Cinderella was a first of its kind as it featured singer-songwriter Brandy as the title character, Cinderella. She was one of three Black female leads in the film, alongside Whitney Houston, who portrayed the Fairy Godmother, and Whoopi Goldberg, who starred in the film as the Queen.

Related: A Guide to the History and Influence of Cinderella

In case you have never seen or heard of this live-action Cinderella film based on the Rodgers & Hammerstein musical, the official description of the live-action film reads:

Cinderella dreams of the impossible — going to the ball and dancing with the prince. And it doesn’t help that her stepmother and stepsisters refuse to let her go. Her impossible dream is realized when her fairy godmother teaches her that with positive thinking and belief in yourself, “impossible things happen every day!”

And now, to celebrate the release of Rodgers & Hammerstein’s Cinderella on Disney+, the original cast is having a reunion, courtesy of Entertainment Weekly. When discussing this exciting event, EW shared:

In advance of Rodgers & Hammerstein’s Cinderella coming to Disney+ this Friday, the cast of the timeless 1997 musical has joined EW to reflect on the impact the project had — and how impossibly fun it was to make it.

Watch a preview of Brandy, Victor Garber, Whoopi Goldberg, and more of the #Cinderella cast reuniting! See our full reunion Thursday 2/11 at 11am ET/8am PT ahead of the iconic film hitting Disney+.

This Thursday, February 11, EW is hosting a one-of-a-kind ball as the original cast will come together and reunite to celebrate the Disney+ debut of this film, which fans have been anxiously waiting to arrive on the Disney streaming service.

The Rodgers & Hammerstein’s Cinderella reunion will stream this Thursday on EW.com. You can also catch it on Entertainment Weekly’s Facebook and YouTube page.

Rodgers & Hammerstein’s Cinderella will debut on Disney+ at the stroke of midnight on February 12. If you are not yet signed up for the streaming service, you can get started here.

With a wicked stepmother (Eleanor Audley) and two jealous stepsisters (Rhoda Williams, Lucille Bliss) who keep her enslaved and in rags, Cinderella (Ilene Woods) stands no chance of attending the royal ball. When her fairy godmother (Verna Felton) appears and magically transforms her reality into a dream come true, Cinderella enchants the handsome Prince Charming at the ball, but must face the wrath of her enraged stepmother and sisters when the spell wears off at midnight.

And in 2015, Disney brought us another live-action Cinderella film, starring Lily James as Ella and Cate Blanchett as the Evil Stepmother. This film is described as:

Celebrate Disney’s Cinderella, a modern classic that shines with beauty, imagination…and magic. Despite being mistreated by her stepmother (Cate Blanchett) and stepsisters, a spirited Ella (Lily James) resolves to take charge of her fate.

Both the 2015 live-action film and the 1950 animated classic are currently streaming on Disney+. Remember, Rodgers & Hammerstein’s Cinderella will debut on Disney+ at the stroke of midnight on February 12.

Are you going to be tuning into the Cinderella reunion? Let us know in the comments below.

Comments Off on ‘Cinderella’ Cast to Reunite and Celebrate Disney+ Arrival