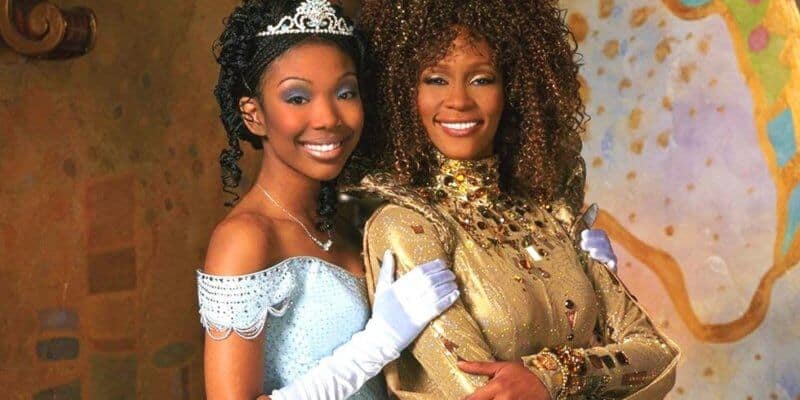 Disney+ is officially bringing Rodgers & Hammerstein’s Cinderella to the streaming service!
Many Disney fans have been wanting to see Rodgers & Hammerstein’s Cinderella come to Disney+ and now their wish is coming true on February 12, 2021. The 1997 film star Brandy, Whitney Houston, and Whoopi Goldberg. According to Variety, on “Thursday morning, Brandy reunited with Goldberg, appearing on ABC’s The View to announce the news”.

Goldberg teased, “It’s pretty remarkable that people have been begging for Cinderella to be re-released for almost 24 years. I mean, what do you think, is it possible?”

“It’s definitely possible. I appreciate the fans. I’m so excited that Cinderella has a home now at Disney plus and we can celebrate, and share, and inspire a whole new generation”, Brandy replied.

Originally premiering on November 2, 1997 to sixty million viewers during “The Wonderful World of Disney” on ABC, “Rodgers & Hammerstein’s Cinderella” became an instant fan favorite, beloved by critics and audiences alike and earning 7 Emmy Award nominations. Celebrated for its diverse representation, sweeping musical acts, and unforgettable song book, the 1997 film features an incredible array of beloved and original songs by the iconic songwriting duo Rodgers & Hammerstein, including “Impossible,” “In My Own Little Corner,” “Ten Minutes Ago,” “A Lovely Night,” “Do I Love You Because You’re Beautiful?” and more.
In “Rodgers & Hammerstein’s Cinderella,” when Cinderella’s cruel stepmother prevents her from attending the Royal Ball, she gets some unexpected help from her Fairy Godmother. The 1997 movie was directed by Robert Iscove, written by Robert I. Freedman, and choregraphed by Rob Marshall. Whitney Houston, Debra Martin Chase, Craig Zadan, and Neil Meron served as Executive Producers. Chris Montan was a Producer and Robyn Crawford was an Associate Producer.
“Rodgers & Hammerstein’s Cinderella” will join the “Celebrate Black Stories” collection that is on Disney+ alongside “Soul,” “Black Is King,” “Black Panther,” “Hidden Figures,” and many more.

It seems that Disney has chosen February to debut Cinderella as part of their Black History Month celebration.
The popular film is well-deserving, as it earned seven Emmy nominations in 1998 and even came out with a win.
Even producer Debra Martin Chase stated, “I am absolutely thrilled that our Rodgers and Hammerstein’s Cinderella will finally be available on Disney+! As the service got up and running, I became inundated on my social media by inquiries from fans asking why the movie was not included in its programming.”

So, if you love the Broadway music of Rodgers & Hammerstein’s Cinderella, get ready to tune into Disney+ on February 12!

Will you be watching Rodgers & Hammerstein’s Cinderella when it is available on Disney+?