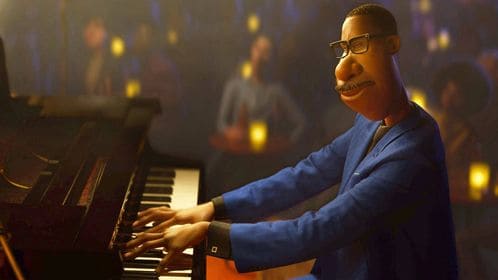 Watching a new Disney IP get integrated into the Disney Parks is always exciting, especially when the IP is barely one month old!

The American Adventure pavilion in EPCOT’s World Showcase is now home to a new exhibit, “The Soul of Jazz: An American Adventure”. When the announcement was officially made, we did not yet have an opening date for the new offering. A few days ago Disney announced that the exhibit would open on February 1, 2021 — which means it is now open!

It’s a special day at The American Adventure inside EPCOT, as we introduce “The Soul of Jazz: An American Adventure.” This new exhibit celebrates the distinctly American musical art form, originated by African Americans and fusing the influences of many different cultures.

Joe Gardner – the musician, mentor and teacher from Disney and Pixar’s new film “Soul,” streaming on Disney+ – shares the rich and surprising history of jazz by taking you on a musical tour of several influential American cities. You’ll also discover artifacts from legendary jazz musicians, including Louis Armstrong. And soon you’ll be able to use the Play Disney Parks mobile app to interact with the exhibit and test your knowledge of jazz.

Our team at Walt Disney Imagineering is thrilled to bring the compelling story of jazz to EPCOT, and we were honored to work with jazz experts and institutions across the country to explore the rich history and influence of this ever-evolving genre of music. We hope you are as inspired by what we discovered as our Imagineers were bringing this exhibit to life.

Walt Disney Imagineering’s Carmen Smith noted that “Guests will be able to explore the colorful history of jazz… You will join Joe Gardner on a musical tour across America. We’re going to make stops in New Orleans, Chicago, New York, Los Angeles, and Puerto Rico. We’re working with some of the top jazz museums across this country. Jazz is the story of America, it unites people from every walk of life. It’s a living breathing art form that’s always evolving and always changing.”

Disney announced that the Soul exhibit would find a home in EPCOT for Black History Month (February), which makes the opening date quite fitting. Disney is also celebrating Black History Month in many ways, from offerings at Disney Springs to Movies Under the Stars at Disney Resorts — for more details on that, click here.

“The Soul of Jazz: An American Adventure” is currently taking place inside The American Adventure. However, the new attraction did not result in any refurbishments or closures within the pavilion, so Guests can visit as they normally would. At the moment, Disney has yet to confirm if this is a permanent experience or if it will just be in place for Black History Month.

For all those who may not be able to get to EPCOT to see the exhibit, don’t fret! Disney has also released a video from American pianist, band leader, and jazz extraordinaire Jon Batiste, who provided the original jazz compositions and arrangements for Disney-Pixar’s Soul. So now, Guests all over the world can take a deep-dive into the world of American Jazz through Soul!

Check out the video below.

Will you be checking out “The Soul of Jazz: An American Adventure” at EPCOT this month?