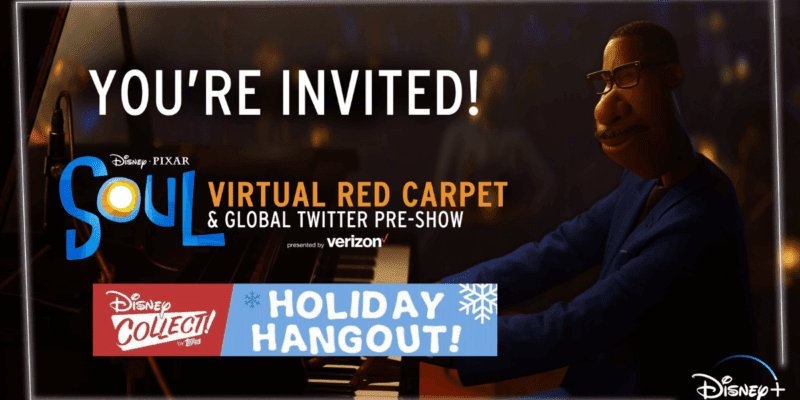 Disney-Pixar’s Soul is ascending to Disney+ the day after Christmas and to commemorate the occasion, two awesome virtual events will be held, and you are invited to both!

The first is an interactive watch party presented by Topps, and the other is the official virtual red carpet event presented by Verizon.

Disney is making it clear that just because Soul is being released in theaters, that does not mean that it can still get the red carpet treatment!

You’re invited to the #PixarSoulvirtual red carpet and global Twitter pre-show on Saturday 12/26! Join the cast and filmmakers of Soul for a special celebration ahead of watching the movie on #DisneyPlus

You’re invited to the #PixarSoul virtual red carpet and global Twitter pre-show on Saturday 12/26! Join the cast and filmmakers of Soul for a special celebration ahead of watching the movie on #DisneyPlus ? pic.twitter.com/kPtXL1kGKt

Shortly before the red carpet ceremony is supposed to take place, at 1 pm ET, you can join an interactive watch party.

Presented by Topps, the Soul watch party is part of Topps Digital’s Holiday Hangout: a 12-day event that encourages fans to watch a Disney holiday movie every day this holiday season. Other movies on the Holiday Hangout list include Frozen, Noelle, The Santa Clause, and Mulan (2020). By utilizing its collectibles app, Disney Collect! by Topps, Disney fans will have a fun and — most importantly — free way to interact in a live in-app chat and collect content while enjoying Pixar Animation Studio’s latest feature film. You can download the Disney Collect! app on either the App Store or Google Play.

Disney-Pixar’s Soul was originally slated for a theatrical release, but it will now debut on Disney+ for no additional charge.

Below is the official film synopsis:

Joe Gardner, a middle school music teacher, has long dreamed of performing jazz music onstage, and finally gets a chance after impressing other jazz musicians during an opening act at the Half Note Club. However, an untimely accident causes Gardner’s soul to be separated from his body and begin to proceed to the Great Beyond, and Gardner manages to escape to the Great Before, a world where souls develop personalities, quirks, and traits before being sent off to Earth. There, Gardner must work with souls in training at the Great Before, such as 22, a soul with a dim view on the concept of life, in order to return to Earth before his body dies.

Are you excited for Disney-Pixar’s Soul? Why or why not? Do you think Disney is making the right call releasing it on Disney+? Let us know in the comments!