Iron Man dresses as 'Snow White,' asks Captain America to be Prince Charming - Inside the Magic 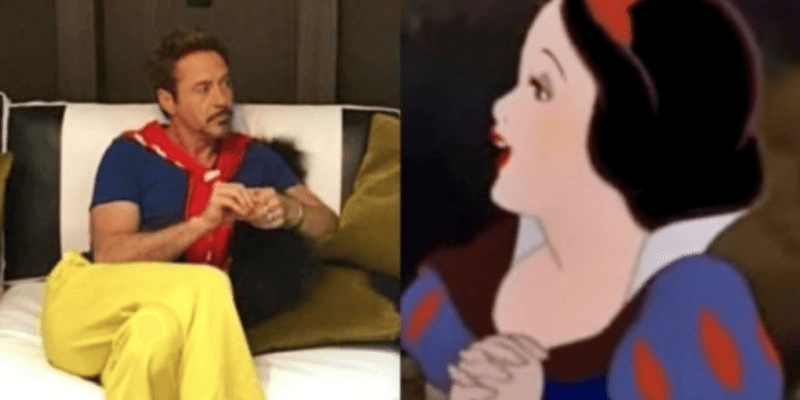 In one of the most hilarious Twitter conversations that has ever existed, Robert Downey Jr., famous for his portrayal of Iron Man in the Marvel Cinematic Universe, asked his pal Chris Evans, who’s known for playing Marvel’s Captain America, to be his Prince Charming.

Robert Downey Jr. has been working side-by-side with Chris Evans for the past several years, as the two have starred in Marvel’s “Avengers” film series and the spinoff “Iron Man” and “Captain America” movies together. And from this work history, the two have developed quite the bromance, which just hit a new level of cuteness, as the two have recently portrayed their relationship on the internet as one found between a Disney Prince and Princess.

This all first began last Tuesday, when Downey tweeted a picture of himself in an ensemble similar to that of “Snow White,” with an image of Evans in a suit resembling that of Prince Charming. In the caption of the tweet, Downey wrote: “A natural addition @ChrisEvans.”

This was immediately met with a comical response by Evans: “Well I don’t know how you keep nailing these, but thank you for my new screensaver. And headshot. How do I make this my ringtone?”

Well I don’t know how you keep nailing these, but thank you for my new screensaver. And headshot. How do I make this my ringtone? https://t.co/eXGKmUyLiN

This public response by Evans was met with the funniest responses by their followers, who decided to take the innocent fun a few steps further with their own take on the movie stars’ tweets.

okay but consider this instead pic.twitter.com/97DAaYyf4b

Some fans even went outside of the Marvel franchise and made references to some other Disney films, including “Hercules,” “Toy Story” and “Beauty and the Beast,” when comparing the epic friendship between the two.

Could there be a more adorable bromance between two major action film stars than that between Robert Downey Jr. and Chris Evans?

You can see the hilarious pair together again on the big screen when “Avengers: Endgame” hits theaters April 26, 2019. Here is a look at everything we know about the upcoming film so far from its first trailer.

What are your thoughts of these hilarious tweets between Robert Downey Jr. and Chris Evans? Let us know in the comments below!