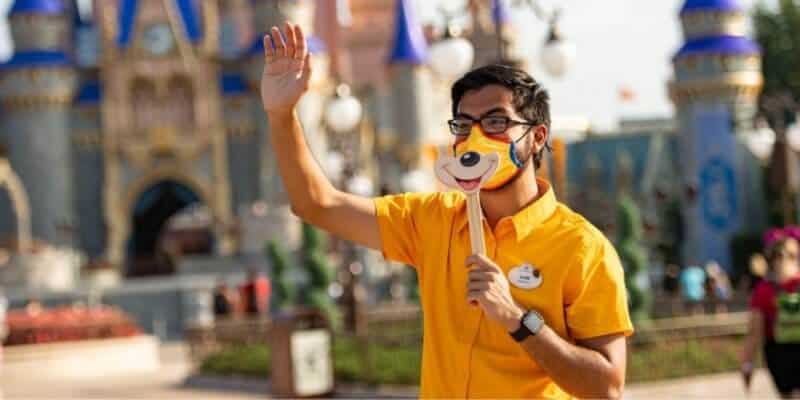 In case you missed it, Walt Disney World Resort has updated its face mask rules. According to the new rule, Disney World Guests no longer have to wear a face mask while outdoors and walking around the parks — It is important to note Guests must still wear face coverings while on attractions, in queue lines, and while indoors. Cast Members have been walking around enforcing these updated rules.

One Reddit user, djdave701, took to the social media platform to share an experience they had on a recent Walt Disney World trip. According to this user, they were in line for Na’vi River Journey at Disney’s Animal Kingdom when a group in front of them did not abide by the new mask rules, which clearly state that masks are still required upon entering and throughout all Disney World attractions, theaters, and transportation — Meaning face masks are required while in the queue lines.

Apparently, these Disney World Guests had their masks down over their chins while in line for the attraction, and even after being told by different Cast Members, they did not listen and continued to pull down their masks while in line. Eventually, according to the Reddit user, the group was removed from the theme park as they did not listen or abide by the new rules.

We were waiting in line for Navi River Journey today and there was a group in front of us who had their masks down over their chin, they kept getting told by Cast Members to pull their masks back up while in line. They’d wear them until the Cast Member couldn’t see them and then pull them down again. No joke, just as we get into the cave, a Cast Member comes and confronts them telling them they’ve been told multiple times and haven’t complied, and they were going to be removed. One of the guests said we’ve only been told 2x so that isn’t fair (which was false), to which the Cast Member said, more than once is more than enough. They removed the group.

Cast Members (for the most part) are enforcing wearing masks in line. from WaltDisneyWorld

As a reminder, if you are planning to visit Walt Disney World Resort, there is new signage placed throughout the theme parks — Magic Kingdom, EPCOT, Disney’s Animal Kingdom, and Disney’s Hollywood Studios — reminding Guests of the new rules, which you can see in the photo below.

This is not the first time Guests were removed from Disney theme parks due to not complying with the rules in place. We reported on an incident involving an elderly Hollywood Studios Guest who was apparently attacked by two strangers from a larger family group who were not wearing masks. You can read more about that here.

Additionally, back in August 2020, an Orlando man was arrested for attacking, hitting, and threatening to kill an EPCOT security guard who enforced the mask policy.

And in September 2020, one Guest was escorted out of Disney’s Hollywood Studios as he was shouting and incorrectly quoting Disney-Pixar’s A Bug’s Life to try and get other Guests to take their masks off with him. You can read more about this incident here.

Face coverings are required for all Guests (ages 2 and up) and Cast Members. Please bring your own face coverings and wear them in all indoor locations, except when actively eating or drinking while stationary and maintaining appropriate physical distancing. Face coverings are optional in outdoor common areas at Walt Disney World Resort, but are still required upon entering and throughout all attractions, theaters and transportation.

It is important to note that if Guests do not comply with the safety rules implemented at the theme parks, they will be asked to leave. Please familiarize yourself with the safety and health protocols in place prior to visiting the Most Magical Place on Earth.

Do you like the new face mask rule at Disney World? Let us know your thoughts in the comments below.