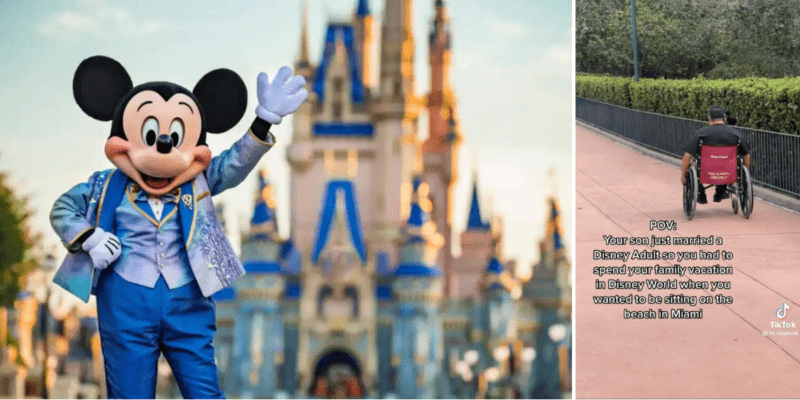 A family was left divided over a trip to Walt Disney World Resort, with one Disney adult apologizing for the experience.

Walt Disney World Resort is a dream destination for many fans who are eager to meet Mickey and Minnie Mouse, Goofy, Pluto, and all their friends, live a magical day experiencing some of the most popular attractions in the world, be mesmerized with world-class entertainment offerings including parades and nighttime shows, and indulge in some of the most delicious snacks including churros and Mickey pretzels. However, the Most Magical Place on Earth is not for everyone, and one family recently found out the hard way.

In a video posted on TikTok by @liz.neyland, she shows her father-in-law slowly pushing himself away in a wheelchair, adding the following caption in her video: “POV: Your son just married a Disney Adult, so you had to spend your family vacation in Disney World when you wanted to be sitting on the beach in Miami.” Liz also apologized in her video caption, saying, “I’m so sorry.”

The hilarious video has racked up over 31K views and 2.5K likes, and while Liz said she felt sorry for her father-in-law, she later commented she and her family had a great time and that she was “grateful they all went when I dragged them there.” Liz also added that her father-in-law ended up renting a car and spending the weekend with his wife in Miami. “They had a wonderful time and met back with us later in the week.”

It is true that spending time at Magic Kingdom, Disney’s Hollywood Studios, EPCOT, or Disney’s Animal Kingdom is not everyone’s cup of tea. Fortunately, this family could get everything sorted out to spend time together and still enjoy the different things they had in mind, like going to the beach and visiting Disney World, making it a great experience for everyone.

Earlier this month, we learned about another family drama caused by a trip to Disney. However, the family involved didn’t specify if they were planning to visit Disneyland Resort or Walt Disney World Resort. You can read more about that family drama by clicking here.

Does your family enjoy visiting Walt Disney World Resort? Or do you like going with someone else better? Let us know in the comments below!