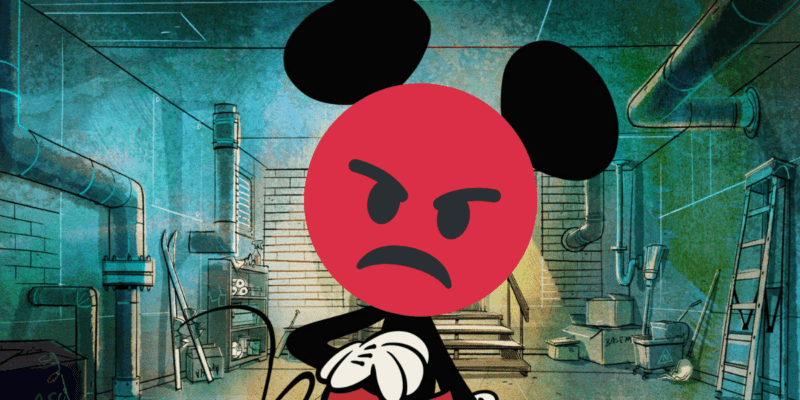 It’s not often Disney fans get a message from Mickey Mouse himself, but one Guest took the power of Mickey Mouse into their own hands.

As the use of the term “Disney Adult” grows more and more each day, so does the criticism, mockery, and at times, overall hate towards adults who enjoy visiting the Disney Parks, using Disney merchandise, or even launching their own small business inspired by Disney magic and their love for it. Although Disney fans should never feel guilty about their love of magic, not everyone feels the same.

Such was the case for Jordan Jacee Woodard (@jordan.jacee), who shared her experience on TikTok while visiting the Magic Kingdom for the first time ever. It is, of course, an emotional video, as she instantly starts crying after seeing Cinderella’s Castle for the first time, as most Guests do.

However, the comments on her video quickly flooded with hate and harassment from some, saying that she was being “ridiculous”, asking if she felt goofy and that “Disney adults are a whole different breed.”

One user even stated, “As an Orlando resident I think we should ban tourists”, a rather strong claim, considering that, according to Visit Florida, “Orlando is a place known for hospitality, and that extends to its many hotels, spas, and services that suit every budget and taste.” The site also states:

It’s true: Orlando is a magical place. And it’s not just because it’s home to Cinderella’s castle at Walt Disney World. There’s an incredible mix of fun things to do in Orlando that make it an ideal vacationing spot for not only families but young singles, baby boomers, foodies, outdoor adventurous types, luxury shoppers and international visitors.

Fortunately, not all comments were as rude as these. Many users quickly took Jordan’s side, saying that her video had made them tear up and filled them with joy, wishing her the best time on her visit.

The most notable response came from Mickey Mouse himself, or at least a version of him.

TikTok user Hassan (@hassankhadair), known for the content he creates using a Mickey Mouse hand puppet, stated everyone should “let this woman have joy.”

Hassan also addresses users who claim “it’s just a building”, referring to Cinderella’s Castle, by saying, “it’s a cool building, it costs a lot of money to get there, so let her and her friends have a happy, beautiful moment”.

This is not the first time Hassan has seen himself involved with the Walt Disney Company in such a notable way, as he was reached by the Company last year regarding his content.

Other comments mentioned how everyone’s talking about healing their inner child until it’s a Disney Adult doing it, and that Disney is a dream to a lot of kids in northern states, as they have to think of flying in addition to Park tickets and accommodation.

One user even created a much-needed comic relief by saying Jordan was crying because she had seen the crowds and lines, both of which are a common concern at this time of the year, with wait times soaring well over 120 minutes for some fan-favorite rides.

How do you feel about this incident? Do people treat adults who enjoy Disney too harshly? Let us know in the comments!