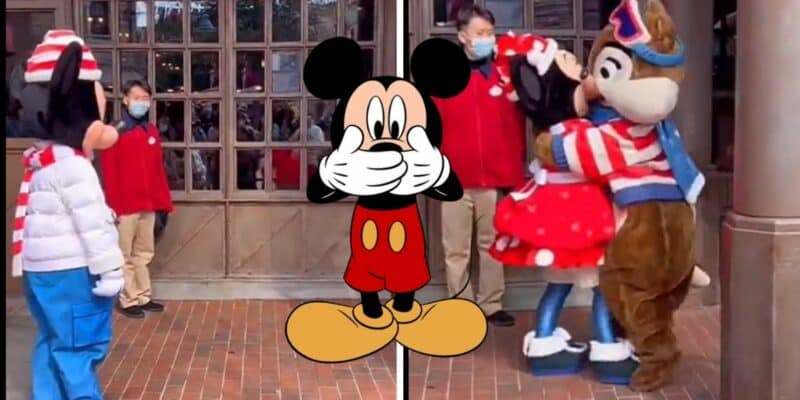 As Disney Resorts across the globe continue their phased reopenings, Disney Guests have been able to still see characters around the theme parks in cavalcades, nighttime shows, and Park sightings.

And for some Guests, Mickey Mouse put on quite the show recently in a surprise sighting.

We love to see fun interactions between characters that help keep the magic of Disney alive for both children and adults. Back in October, Donald Duck was seen getting “mad” after Daisy Duck flirted with a Guest at Disney’s Hollywood Studios at Walt Disney World.

Now, it seems Mickey Mouse also has some relationship issues after Minnie Mouse was caught flirting with Chip and Dale.

DongDong shared a video to Twitter expressing surprise that Minnie Mouse would flirt with other characters during the festive season:

The video, filmed at Shanghai Disneyland Resort, shows Minnie Mouse getting cozy with Chip and Dale right in front of Mickey Mouse himself.

After standing and staring at Chip during his hug with Minnie, Mickey proceeds to chase Chip backstage. Dale then seizes his opportunity and embraces Minnie once Mickey and Chip have gone, with Minnie then berating the popular character.

It’s interesting to see another, more angry, side to the usually joyful and optimistic Mickey Mouse, who recently celebrated his 93rd birthday on November 18.

Over in Magic Kingdom in Walt Disney World, Mickey Mouse is now donning his 50th anniversary outfit and greeting Guests for the first time since March 2020. Both Princess Fairytale Hall and Town Square Theater have reopened at Magic Kingdom as Disney Princesses and Mickey Mouse return for meet and greets, albeit modified.

With entertainment returning across the Central Florida Resort, including Festival of the Lion King over at Disney’s Animal Kingdom, meet and greets were revealed to be coming back with a new name: “sightings”.

Beginning October 19, the Disney Resort debuted Disney Genie, Disney Genie+, and the new FastPass+ replacement attraction entrances, Lightning Lane, meaning Guests can now skip the standby lines at rides like Star Wars: Rise of the Resistance and Remy’s Ratatouille Adventure for an additional cost. The digital service has been plagued with issues and a divided reaction from Guests.

Have you ever been part of a fun character experience on your Disney vacation? Let us know in the comments below!