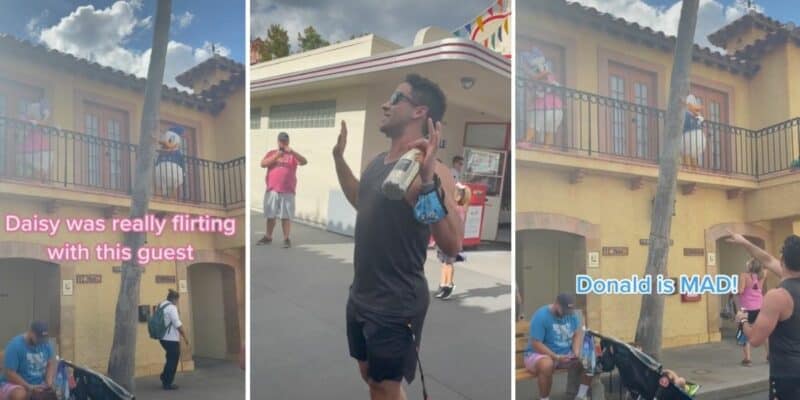 Disney characters are a huge part of the Walt Disney World experience. Whether they’re from the screen, pages of a book, or from the mind of Walt Disney himself, Guests visiting the iconic Central Florida theme park are bound to come face to face with at least some of them.

In fact, recently, one Guest actually made one popular character real mad when he was caught flirting with his girlfriend over at Disney’s Hollywood Studios.

Character meet and greets are back…kind of! Pre-pandemic, Disney World Resort Guests could take time out of their day to meet fan-favorite characters like Frozen‘s Elsa and Tangled‘s Rapunzel, but due to continued restrictions, those types of experiences were suspended at the Disney Park, and instead, characters would greet Guests from afar like the Star Wars stormtroopers at Disney Springs or Anastasia and Drizella on the balcony of Cinderella Castle.

Even though modified character meet and greets and live entertainment are on their way back to some of the Disney Parks, Disney World is still utilizing characters in different ways. Keeping the Disney magic alive at Hollywood Studios, Donald and Daisy Duck put on quite a show for a group of Guests after one person decided to flirt with Daisy during his Walt Disney World vacation.

Sharing to TikTok, Taylor (@livingbehindthecastle), captured the comical moment Donald got “mad” and Daisy retaliated by stating she still doesn’t have a ring.

The video shows one Guest talking up to Daisy on the balcony above the restrooms at Disney’s Hollywood Studios, like some kind of modern-day Romeo and Juliet Disney Special. Daisy’s boyfriend, the iconic Fab Five character Donald Duck, was seemingly distraught over the encounter at the Orlando Park and clearly felt betrayed by the interaction. Showing Daisy commenting on her lack of ring and Donald trying to confront the Guest, the TikTok video has been viewed over 28,000 times with many people discussing the hilarity of the situation, particularly calling out Daisy for being a “queen” and a “riot” at Disney Parks.

While many character experiences are joyous and fun, sometimes there are incidents that derail the Disney magic like the moment one Guest touched Gaston inappropriately, and the alleged harassments of Pirates of the Caribbean fan-favorite, Captain Jack Sparrow.

The hilarious moment between the Guest and the Ducks takes place just a week after the Walt Disney World Resort began its 50th anniversary celebration on October 1. The World’s Most Magical Celebration at the Disney theme park brought the launch of Disney Enchantment at Magic Kingdom, and Harmonious and the Remy’s Ratatouille Adventure attraction at EPCOT. Disney’s Animal Kingdom also debuted the new daytime show, Disney KiteTails, which, for the most part, has drawn criticism while also becoming a viral TikTok sensation.

Have you ever been part of a fun character experience on your Disney vacation? Let us know in the comments below!