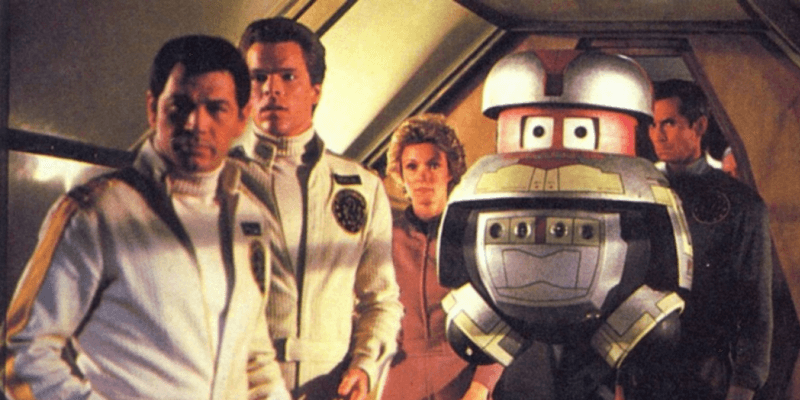 In the height of the “Disney Dark Ages” when The Walt Disney Studios was in a lull, and their last hit was nearly two decades prior, the Mouse House jumped on the science fiction bandwagon spawned by George Lucas’s 1977 space opera and produced one of the cheesiest Star Wars knock-off movies ever: Disney’s The Black Hole (1979).

It’s crazy to say, but the Star Wars Holiday Special (even the LEGO Star Wars version) might be better than The Black Hole.

By the late 1970s, cowboys were out the door, and the space age was here to stay. No longer interested in the American frontier or “liquid space,” America and the rest of the world were caught up with outer space. “The final frontier” had been a popular subject in literature for quite some time by 1977, but when Star Wars: Episode IV – A New Hope (1977) debuted, pop culture was engulfed in the space age.

Stanley Kubrick’s 2001: A Space Oddessey undoubtedly influenced Star Wars, and the classic Kubrick film is still regarded as one of the best science fiction movies in history. Still, A New Hope spoke to new generations of moviegoers and consumers.

Everyone from Happy Days to Olivia Newton-John (go watch Xanadu) was caught up in a tractor beam. However, former Los Angeles Rams Tight End and Walt Disney’s son-in-law Ron W. Miller — The Walt Disney Company CEO from 1980 to 1984 — was on a mission from Marvin the Martian to break Disney out of its reputation for all-ages entertainment and go where no mouse has gone before: space.

A cross between The Twilight Zone and Ridley Scott’s Alien (1979), Disney’s The Black Hole nails every trope and space movie stereotype on the nose. However, that isn’t a complaint. The Black Hole is weirdly comforting and one of those classic 1970s Disney movies that’s “so bad you have to watch it.”

Here’s the synopsis for The Black Hole from IMDb:

An Earth exploratory ship, the USS Palomino, discovers a black hole with a lost ship, the USS Cygnus, just outside its event horizon. Deciding to solve the mystery of the Cygnus are: the Palomino’s Captain, Dan Holland; his First Officer, Lieutenant Charlie Pizer; journalist Harry Booth; scientist and ESP-sensitive Dr. Kate McCrae, whose father was the Cygnus’s First Officer; Dr. Alex Durant, the expedition’s civilian leader; and the robot known as V.I.N.CENT. The Palomino attempts a dangerous fly-by of the darkened ship. As they come within close range of it, the buffeting they experience (due to the black hole’s gravity) suddenly ceases. They bring more instruments to bear on the derelict, but do not even realize the gravity-free zone is artificial; slipping outside it, they are almost drawn into the black hole, an abyss from which no one can escape. Matters worsen when Reinhardt holds the crew captive, after realizing that they can help him reach his goal…

Like any good science fiction movie, The Black Hole is set in the year 2130 and defies the law of physics. But, the storyline makes up for this goof.

With Oscar-winner Maximilian Schell (A Bridge Too Far, Deep Impact) leading the film as Dr. Hans Reinhardt, delirious German scientist and captain of the USS Cygnus that seemingly disappeared 20 years prior, and Robert Foster (Jackie Brown), Anthony Perkins (Psycho), and The Black Hole‘s Princess Leia Yvette Mimieux (The Time Machine, Jackson County Jail) in supporting roles, The Black Hole had a lot going for itself.

You may be asking yourself, “Wait, this sounds like a blockbuster film! Stop the press and hold the phone; the Black Hole is a real winner!” But, things begin to fall apart pretty quickly when watching the movie.

The Black Hole was directed and produced largely by TV veterans, giving the movie a made-for-television feeling. Much of the props and mise en scène looked too close to Star Wars, and Dr. Hans Reinhardt pulls a Captain Nemo from 20,000 Leagues Under the Sea — Walt Disney’s personal project from 1954 that redefined movie-making.

The set design, the scope of production, and the aesthetic of the movie are insanely pleasing. The AI units B.O.B. and V.I.N.CENT look like they belong in Disney’s Horizons or Wonders of Life from the EPCOT Center (which is awesome) knife-spinning Maximillian (interestingly sharing the leading actor’s name) all bring a special feel to the movie.

There are no TIE fighter ships or a Death Star, but Star Wars fans will appreciate the crude technology present on the capital ships — like that in Din Djarin’s Razor Crest — and the Empire-like galactic starcruiser.

On top of that, The Black Hole was shot entirely on a beautiful 35mm film (Star Wars: A New Hope and Aliens were also shot on 35mm) that captures the huge settings. The matte paintings were that of Chris Evans, Mike Pangrazio, Frank Ordaz, Harrison Ellenshaw, and Ralph McQuarrie — the master oil painters for the Star Wars original trilogy — and beautiful miniatures.

The AV Club put it best,

The Black Hole is a product of aesthetic and environment. There’s an arresting vastness to both its starfields and the interiors of the Cygnus: the seemingly infinite corridors, the glittering panels, and unexplained planetary models attended to by hooded silhouettes in a cavernous control room. The film is never better than when its protagonists are wandering around the Cygnus, puzzling over the unoccupied dormitories and the strange rituals of the AI who serve under Reinhardt. When it’s not passing exposition to Ernest Borgnine or running cross stitch aphorisms through the vocal processor of robot sidekick V.I.N.CENT (Roddy McDowall), there’s something alluringly unknowable about The Black Hole

Despite there not being a Palpatine or Darth Vader character in The Black Hole as the antagonist, Dr. Reinhardt and his evil robots — his personal stormtroopers — The Black Hole is a kind compliment to Star Wars movies and the Star Wars saga.

There’s a slew of sci-fi movies from the late 70s early 80s chasing the Star Wars aesthetic — like Alien (1979), Star Crash (1978), and Moonraker (1979), but The Black Hole takes the cake. It’s too bad that it bombed in the box office, and critics gave it an 8% on Rotten Tomatoes, but not every movie is a winner.

Without a doubt, check out The Black Hole. This was Disney’s first PG rating movie (wow!) and their big-budget 1979 Christmas movie that has gained a loveable following by old-school Disney fans. There’s something magical from 1970s Disney movies that will never cease to please fans.

Have you watched The Black Hole? Let us know in the comments below!