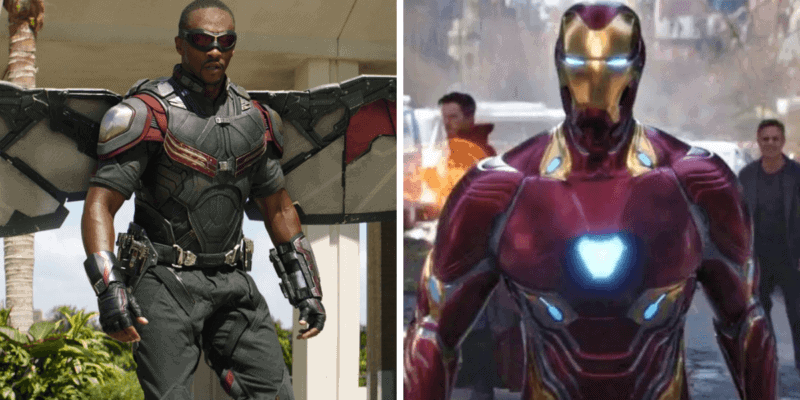 The Falcon and the Winter Soldier is set to introduce a new Falcon suit.

According to Falcon actor Anthony Mackie, it’s set to be the most high-tech version yet.

In fact, Comic Book reports that the actor has said it will get an Iron Man-style upgrade.

Related: Why Did Marvel Ignore Tony Stark and Wanda’s Relationship?

Mackie spoke at length in Disney’s D23 Magazine’s latest issue about the new series. He said that Sam Wilson (The Falcon) is taking fewer chances this time around following the events of Avengers: Infinity War and Endgame. The blip meant that Sam was wiped from existence for a full five years alongside his partner, Bucky Barnes / The Winter Soldier (Sebastian Stan).

It’s no surprise then that Wilson is looking to upgrade his old suit. However, what is a surprise is that Mackie says he’ll be taking a page out of an old rival’s book. Speaking about how Iron Man influenced Sam’s decisions, the actor said:

“The wings have become much more pliable, much more dynamic […] He’s much more of a winged force. Coming out of Endgame and being blipped out and blipped back in, it seems this time around, he really appreciates being alive. He’s been even more ‘Tony Starkerized’ than before.”

The Falcon and Iron Man have had a rocky past

Sam Wilson and Tony Stark have notoriously failed to see eye-to-eye. Most notably, the two bashed heads during the events of Captain: America Civil War. Sam obviously took Steve Rogers’ side during the debate over the Sokovia accords.

As a result, The Falcon was thrust into a messy fight against Tony Stark’s team of Avengers. This saw Sam take on many heroes for the first time, including Black Widow, Spider-Man, Black Panther, Vision, and War Machine.

Obviously, it wasn’t just the Sokovia accords that caused the pair to fight. Tony Stark also had a personal bone to pick with Captain America’s friend-turned-brainwashed-enemy The Winter Soldier / Bucky Barnes.

Ultimately the heroes came together as a team during the events of Avengers: Endgame after Hulk brought all the fallen back. Now it seems that Sam Wilson has learned a lot from Tony Stark in regard to upgrading his many suits of armor. We can’t wait to see what the new Falcon suit looks like, especially with all of its new upgrades!

From what we’ve seen in the pre-release materials, Sam Wilson is sporting a more red aesthetic this time around. It stands to reason that his wings might follow suit. Eventually, if the season two title change rumors are true, the wings might adopt the red, white, and blue color scheme of Captain America. That’s assuming Sam dons the mantle of Captain America by the end of season one, of course.

In terms of logistics, we’d love to see Sam’s wings became more high-tech, just like Iron Man. As you’ll remember, Tony Stark’s suit started off pretty clunky in the first Iron Man movie. However, with every subsequent Marvel Cinematic Universe appearance, his suits were upgraded. In fact, by the time of Iron Man 3, he had more than forty of them! Then, in Avengers: Infinity War we got the Mark 50; Tony’s most high-tech armor yet. It allowed him to don the armor from beneath his clothes using a detachable arc reactor. The Mark 85 then came in Avengers: Endgame, which was even more futuristic.

Now, we doubt that Sam’s gear will get anywhere near the level of the genius, billionaire, playboy, philanthropist’s. However, with Mackie saying that it’s taking more inspiration from Stark, we’re really excited to see how futuristic the new Falcon suit is.

The Falcon and the Winter Soldier is coming soon

The new Falcon suit is just the tip of the exciting iceberg when it comes to this new series. As Anthony Mackie takes over from Chris Evans as Captain America, he and Sebastian Stan’s Winter Soldier will face enemies old and new. Captain America: Civil War villain Zemo (Daniel Brühl) will return as the main antagonist, while they’ll also take on John Walker / US Agent.

Just as WandaVision is bringing in a more comic-accurate version of the Scarlet Witch, The Falcon and the Winter Soldier will draw heavily from Marvel Comics. In Earth 616 (the main Marvel universe) Sam Wilson took on the role of Captain America. Though he kept his Falcon wings, he incorporated many elements of Steve’s costume into his new suit. In a way then, the new suit is a combination of both Tony Stark and Steve Rogers.

The Falcon and the Winter Soldier releases on March 19, 2021. It stars Anthony Mackie as Sam Wilson / The Falcon and Sebastian Stan as Bucky Barnes / The Winter Soldier. The supporting cast includes Daniel Brühl as Baron Zemo, Emily VanCamp as Agent 13 / Sharon Carter, and Wyatt Russell as US Agent. It’s a Disney+ exclusive and one of many Marvel tv series including Armor Wars, Loki, and Hawkeye. If you are not yet signed up for the streaming service, you can get started here.