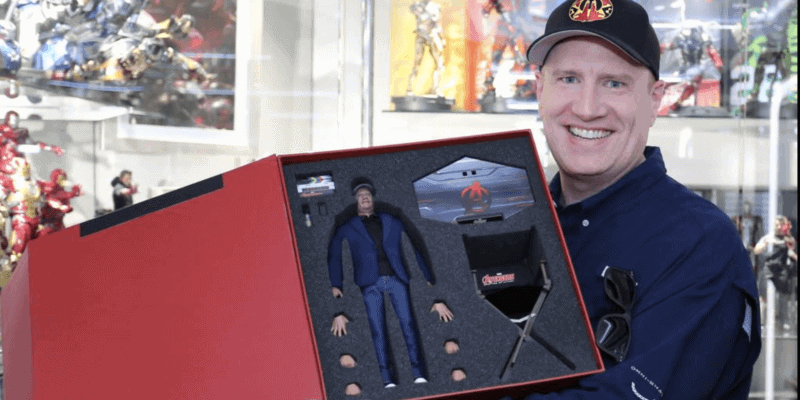 Marvel President Kevin Feige has a lot on his plate these days. In fact, WandaVision, Marvel Studios’ first foray into streaming TV series, just wrapped its first season on March 5.

The series set up the upcoming film Doctor Strange in the Multiverse of Madness (2022) and gave Marvel fans insight into exactly how Scarlet Witch/Wanda Maximoff (Elizabeth Olsen) dealt with her grief over losing Vision (Paul Bettany) in Avengers: Endgame (2019). Spoiler alert: Not well.

Plus, the Marvel Cinematic Universe has at least a dozen other projects in the works at this time, mostly for Disney+.

In addition to all of that, the Marvel boss is about to blast off into a galaxy far, far away. Feige has been confirmed to be working on an as-yet-untitled Star Wars movie with Loki head writer Michael Waldron.

There is not much information currently known about the upcoming Star Wars movie, but fans already have all sorts of ideas, including casting Scarlett Johansson as a Sith, giving Darth Vader a prominent role, or setting the movie in the Old Republic era.

In addition to these rumors, reports have been flying that Feige was also set to be involved in the upcoming live-action Star Wars series, such as Jon Favreau and Dave Filoni’s hit, The Mandalorian.

Related: Can Marvel’s Feige Bring the Force Back to ‘Star Wars’?

Now, however, the Marvel Studios head has put these rumors to rest in an interview with Entertainment Weekly. Feige said:

“No. That’s all Kathy Kennedy,” Feige said, referring to the president of Lucasfilm. “I’m involved in as much as I stay up until midnight L.A. time to watch new episodes of The Mandalorian when they drop.”

Disney announced in September 2019 that Feige, a known Star Wars fan, will produce a new movie for the franchise with Kennedy. “With the close of the Skywalker Saga, Kathy is pursuing a new era in Star Wars storytelling, and knowing what a die-hard fan Kevin is, it made sense for these two extraordinary producers to work on a Star Wars film together,” Alan Horn, co-chairman and chief creative officer of the Walt Disney Studios, said at the time.

Even without Feige’s involvement, the future of Star Wars live-action TV series is in good hands. Mandalorian creator Jon Favreau and executive producer Dave Filoni have four series in the works right now — The Mandalorian Season 3, Ahsoka, Rangers of the New Republic, and The Book of Boba Fett.

Feige and Favreau previously worked together on the Iron Man trilogy with actor Robert Downey Jr., which is where the online rumors of the Marvel head’s involvement in The Mandalorian saga may have stemmed from.

There are also numerous other streaming projects in development. It’s certainly an exciting time to be a fan of the Star Wars franchise.

What do you think about Feige’s Star Wars project? Would you like to see Kevin Feige work on a Star Wars series, too? Weigh in below!